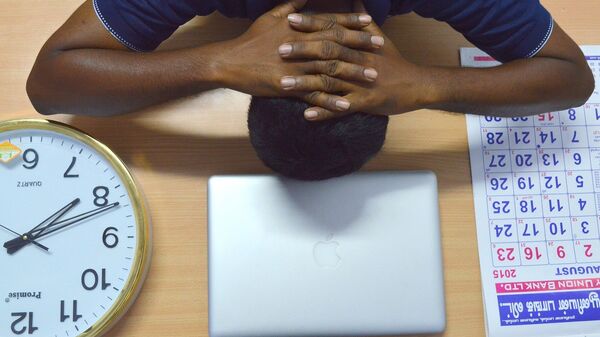 CC0 / Pixabay /
Subscribe
International
India
Africa
Exams are sometimes the final straw that pushes under-25s into taking their own lives in the UK, according to a major inquiry conducted by the University of Manchester's Center for Mental Health and Safety, the UK's leading research program in this field.

The report makes clear suicides among children and young adults in the UK peak at the beginning of exam season, suggesting adding pressure to achieve good results is harming the mental health of young Britons.

Our latest report on #suicide in children & young people now available on our website https://t.co/YOtDTw9wZg

On average, in England and Wales 96 people aged under 25 take their own lives every year in April and May, while the next highest number — 88 — do so in September, when new students start at university.

Of the 145 suicides among those aged under 20 in 2014-15, 63 (43 percent) of the individuals involved were suffering from academic pressures of varying kinds before their deaths. Almost one in three — 46 (32 percent) — had exams at the time, or coming up soon, or were waiting for exam results. A higher proportion of those aged 20-24 were facing "academic pressures overall" before their death (47 percent), although there were only 15 suicides in that age group.

The report follows a mere two months after Papyrus, the charity dedicated to preventing young suicides, reported a dramatic increase in the number of students seeking help with serious stress over exams.

"As exams loom closer, there is always an increase in young people seeking help with suicidal thoughts at this time of year, but the charity is receiving many more contacts from students struggling at school or college. One concern prevalent this year is fear of the future: fear that if they don't pass the first time or get good grades it will impact their chances of getting a job," the charity said.

Nonetheless, the UK still has a relatively low rate of young suicides compared with other countries — and within the UK itself, Scotland and Northern Ireland have more such deaths per capita than England or Wales.

Around 125 youth suicides a year occur soon after the person involved has experienced bereavement. One in four under-20s and 28 percent of 20 to 24-year-olds had lost a relative, partner, friend or acquaintance around a year or more beforehand. In 11 percent of suicides among under-20s, the person who those involved had lost had also taken their own life.

Powerful new report shows how suicide in children and young people is linked to bereavementhttps://t.co/DtLu6JnT0m

Of the 922 deaths the University of Manchester team scrutinized, 708 (77 percent) had been judged at a coroner's inquest to have been suicide, while the remaining 214 (23 percent) ended with an undetermined or open conclusion.

The study also identified the treatment of self-harm as the most important service response in preventing suicide in young people. Previous self-harm was common in young suicide cases, evident in around half of under-20s and 41 percent of 20- 24-year-olds.

"Self-harm, even when injuries seem minor, is one of the most important indicators of suicide risk and should always be taken seriously. We know that the interventions currently available can be effective but they aren't available everywhere. Ensuring there are self-harm services for young people in every area is a suicide prevention priority," said Professor Nav Kapur, the inquiry's Head of Research.

Other motivating factors in young suicides identified by the report were bullying, workplace pressures and financial and housing problems.