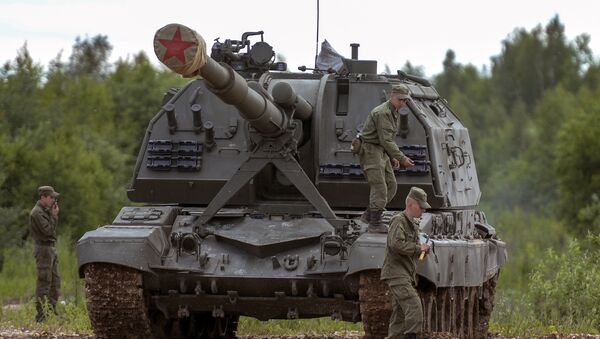 The contract on the delivery of Russian tanks, Smerch multiple rocket launchers and Msta-S self-propelled howitzers to Azerbaijan is 90-percent complete and paid for, Azerbaijan's Defense Minister Zakir Hasanov said in an interview with RIA Novosti.

"I as a defense minister am interested in army funding, which only increased last year. This year the figure of 17-20 percent was announced," Hasasnov said.

He noted that Baku's goal in recent years has been to shore up and upgrade the national army.

"The contract has already been fulfilled by almost 90 percent. We paid for it. There are little things left. Everything has long been used in Azerbaijan and successfully applied… All these are modern weapons that we have mastered and are using," Hasanov said.

No Results From Karabakh Talks, Tensions Growing - Azerbaijan Defense Minister
Azerbaijan is considering the possibility of purchasing an extra batch of arms from Russia and is conducting tests, Azerbaijan's minister said.

"We are now additionally considering some samples of arms, requesting, testing. Buying weapons is a multifaceted issue. On the one hand, it is necessary to avoid a formula, on the other hand – variety creates problems in service. This is a very difficult question," Hasanov told RIA Novosti in an interview.

Late June, the Azeri Defense Ministry said that the country received a large batch of Russian weapons and military equipment.

In January, Azerbaijan's President Ilham Aliyev told Sputnik that Baku was in talks with Moscow on new arms purchases, adding that the signed contracts had totaled $5 billion, with most of them already having been implemented.