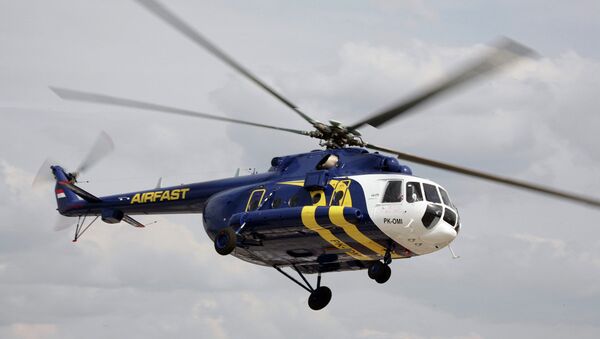 The military transport helicopter Mi-171 Sh-VN will be presented for the first time at the MAKS-2017 showcase, the Russian Helicopters company said in a press release Thursday.

Russian Special Forces Mi-35M Helicopters Take Part in Drill
MOSCOW (Sputnik) — The military transport helicopter Mi-171 Sh-VN will be presented for the first time at the International Aviation and Space Salon MAKS, to be held near Moscow on July 18-23, the Russian Helicopters company said in a press release Thursday.

According to the head of Russian Helicopters, Andrey Boginsky, the new modification of a combat transport helicopter of Mi-8/17 type was developed taking into account the military experience of attack helicopters' operations gained during the anti-terrorist mission of the Russian Aerospace Forces in Syria. The helicopter, manufactured by Ulan-Ude Aviation Plant, embodies a whole range of design characteristics that improve combat efficiency and persistence of the machine.

The Mi-171Sh-VN helicopter is equipped with new profile composite rotor blades and an X-shaped tail rotor. These innovations allow the helicopter to have increased cruise and maximum flight speed, up to 161 mph and 174 mph respectively. The helicopter's maximum takeoff weight amounts to 13.5 tonnes.