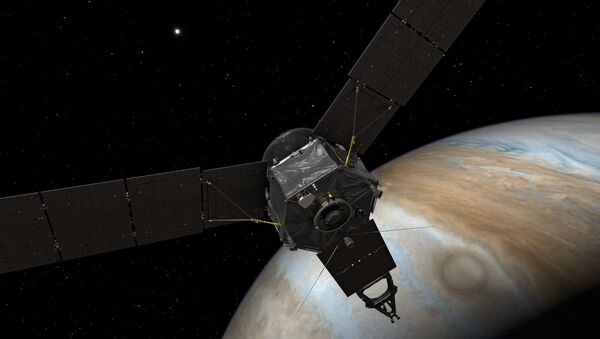 © NASA . JPL-Caltech
Subscribe
International
India
Africa
NASA has announced that their Juno probe, currently in orbit around Jupiter, has successfully completed a close flyby of the Great Red Spot that is the planet’s most iconic physical feature. Raw data has been returned to Earth, leading to spectacular images of the mammoth storm.

On Monday evening, Juno made a close approach to Jupiter to study the Great Red Spot, an atmospheric storm 1.3 times as wide as the Earth. Being made of gas, Jupiter doesn't exactly have a "surface" — at its closest approach, Juno came within 2,200 miles of the planet's cloud tops.

Juno then shifted upwards and flew over the Great Red Spot from a height of 5,600 miles. This was part of Juno's sixth orbit around the planet, with the seventh of a planned 12 to occur in early September.

"For generations, people from all over the world and all walks of life have marveled over the Great Red Spot," said Scott Bolton, Juno's principal investigator, in a statement. "Now we are finally going to see what this storm looks like up close and personal."

"We're so close, I think we're going to blow their stuff away. We'll see when we see it. Eventually, we'll be able to make a bit of a movie, I'm hoping, that you won't have been able to see before. We'll definitely get an up-close-and-personal view, and hopefully be able to provide something that lets the viewer feel like they're riding along."

"If you just look at reflected light from an extrasolar planet, you're not going to be able to tell what it's made of," added Amy Simon, with NASA's Goddard Space Flight Center, who designed Juno. "Looking at as many possible different cases in our own solar system could enable us to then apply that knowledge to extrasolar planets."

Famous as it is, the Great Red Spot remains an enigma for planetary scientists. They continue to debate what powers the storm, how deep it goes, how old it is and how it received its iconic red coloration.

"Not a lot is known," said Bolton in an interview with CBS News on Monday. "Here's the largest and most fierce storm in the entire solar system and it's lasted hundreds of years, so that's a lot different than anything else we've ever studied. The question is, how can it last that long? What's powering it, how's it really working inside?"

The $1.1 billion Juno probe launched in 2011 and arrived at Jupiter';s orbit just over one year ago, in July 2016. It is in a highly elliptical orbit around Jupiter, reaching about 5 million miles out over the course of one rotation. Once it finishes its two-year mission, it will be sent careening into Jupiter, whereupon the gas giant's atmosphere will totally destroy it.