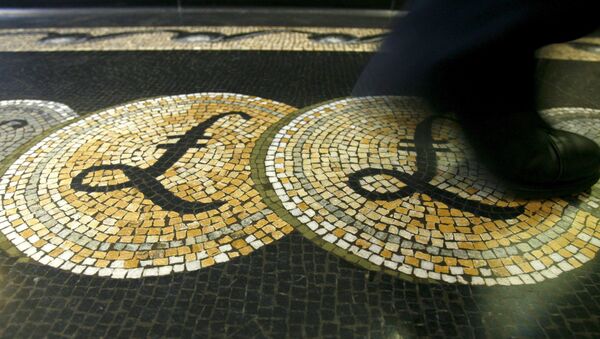 'Smoking Gun' Recording Entangles Bank of England in Libor Rigging Scandal
Kristian Rouz – The UK cabinet, albeit still refraining from providing a broadband fiscal stimulus to the post-Brexit economy due to the Bank of England’s (BOE) low interest rate environment, has reached an agreement with the nation’s five prominent lenders to support small and medium enterprise (SME) financing in order to support export-oriented industries.

The UK economy is positioned to benefit from the lower pound FX rate, and support for national exports is seen by the cabinet as crucial in achieving faster economic growth amidst Brexit headwinds.

UK Trade Secretary Liam Fox has reached a deal with five major banks, namely, Barclays Plc, HSBC, Lloyds Banking Group, Royal Bank of Scotland and Santander, providing that the lenders will increase their volume of SME financing focusing on export-oriented companies and industries. The biggest beneficiaries of the agreement will be the British manufacturers of the English North, the area once dominated by shipbuilding, steel and heavy machinery production.

'You Need Us, We Need EU Labor': How Non-UK Nationals Shape Britain's Economy
The weaker pound after the Brexit vote has opened an opportunity for the UK to narrow it trade deficit and possibly turn it into a surplus, and the government is willing to ensure that export-oriented companies will enjoy a greater access to private-sector bank loans, backed by the government funds. This means that, whilst the cabinet is still willing to protract on a comprehensive fiscal stimulus implementation, a targeted budget stimulation of the manufacturing sector is deemed as a shortcut to overcoming the post-Brexit economic slowdown.

The Department for International Trade said in an email on Wednesday that the agreement is designed to help small and medium-size UK manufacturers focused on exporting their goods, as well as those who are aiming to become part of the supply chain for larger exporters.

“Providing that finance to suppliers as well as exporters means spreading the benefits of global trade, supporting more jobs and growth for companies large and small,” Fox said.

UK banks will be able to provide SME financing to such companies with the backing of the UK government, hedging the banks against possible losses.

Economic Improvement on Both Sides of the Channel to Set Tone for Brexit Talks
The government hopes that UK lenders will expand their working capital loans issuance, as well as issuance of debt for international buyers. The deal is a de-facto off-budget fiscal stimulus, allowing the government to spur economic growth whilst avoiding the risks of asset bubbles, a typical spillover of a broader fiscal stimulus in the ultra-low central bank rates environment.

Since 2011, UK banks have provided some £500 mln in the form of SME financing within the UK Export Finance framework, funded entirely by the government. The new agreement is poised to increase the volumes of SME financing, as private bank money is a more efficient tool of stimulating business activity, while the cabinet only provides guarantees of financial backing to the lenders.

The Department for International Trade said that the £500 mln in SME financing released in the past six years has generated “several billions of pounds” in international contracts, effectively boosting the UK exports. The new scheme is expected to generate greater returns for the UK-based companies, further narrow the UK trade deficit, possibly turning it into surplus, help the domestic labour market and economic growth, and allow for the BOE rate hikes.

This, in turn, will create an appropriate environment for the government to implement broader fiscal stimulus measures should GDP growth remain tepid.

The new agreement, Secretary Fox said, “lifts a common barrier to exporting”, which is lower availability of SME finance in the post-crisis Britain, and is designed to help UK small and medium businesses “seize the global demand for British exports”.

SME financing has been subdued since the European debt crisis of the early 2010s as private lenders have seen it as less profitable than financial market operations. However, with the governmental backing, the low profitability of SME financing is made up for by the lower volatility stemming from the governmental backing, meaning the banks are poised to release hundreds of millions into the UK manufacturing sector in the coming months.