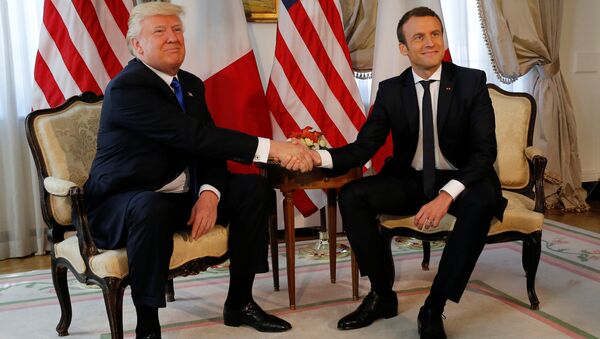 US President Donald Trump’s upcoming visit to France is a chance for French President Emmanuel Macron to "distinguish himself," experts told Sputnik, adding that the visit could be beneficial for Trump as well in terms of creating a better image.

World
Trump to Address US-France Military Ties in News Conference With Macron
MOSCOW (Sputnik) — Trump will visit France on July 14, the Bastille Day, to reaffirm Washington’s "ties of friendship" with Paris, as well as to celebrate the 100th anniversary of the US entry into the World War I.

"No other European state has so far received Trump, so Macron differs. He has in mind being apart a bit, which allows him to strengthen his leadership. And unlike [German Chancellor] Angela Merkel, he doesn't have the interest in re-election, he was just sworn-in, so it is precisely the way to distinguish himself," Marie-Cecile Naves, a researcher at the French Institute for International and Strategic Affairs (IRIS), said.

She reminded that Macron has repeatedly expressed his disagreement with Trump’s policies in the past, but the meeting is a way to establish future relations with the US president and to allow the history of the cooperation between the countries to overcome the contradictions surrounding the personality of Trump.

"He doesn’t hide the major differences with Trump, but it’s a way to put himself in this position to give a hand to Trump, probably for the future," Naves explained.

Despite the fact that there are "questions" regarding the cooperation with the United States and the public image of Trump, Macron wants to maintain the strategic relations with the United States, because "it is a long-term interest for France, so we need to build it whether Trump is the president or not."

"There is a desire to have this personal connection, maybe find some more positive agenda," Rapnouil said.

Speaking about Macron’s ideas on the meeting with Trump and the fact that the visit is set for July 14, the general manager of the Robert Schuman Foundation think tank, Pascale Joannin, said that there is a possibility of Trump and Macron holding a meeting with German Chancellor Angela Merkel, who will be in Paris on July 14 as well.

"Probably there will be a trilateral meeting [between Macron, Trump and Merkel], before or after [the parade of July 14]. It’s not impossible," Joannin said.

The visit is also beneficial for Trump, as it could shatter the image of the US president as of an isolationist, Jean-Luc Marret, a researcher at the Foundation for Strategic Research (FRS), said.

"It even affirms his political agenda getting an international image. So it is a win-win approach," Marret said.

Naves agrees with such point of view, explaining that the visit sends a message to Trump’s electorate in the United States, telling them that the president is "liked" abroad and is "just the person to ‘make America great again.’"

"I don’t think that the European idea is to antagonize Trump. Merkel together with Macron admit there are a lot of differences but they don’t want to fight about it, they want to be able to preserve what can be preserved," Rapnouil said, but stressed that there are numerous disagreements, including on the issues of climate and the Iranian nuclear deal.

Despite the disagreements between the French and US leaders and their policies, some topics remain that are of mutual interest.

"The security questions are the common responsibility," Charles de Marcilly, the chief of the Brussels bureau of Robert Schuman Foundation, said.

The visit to France is a way for Trump to explain his political agenda, because it corresponds with "his vision of security, defense and patriotism," which the Bastille Day is about, Jean-Luc Marret said.

Given that the United States has announced its withdrawal from the Paris climate agreement, it is understandable that climate issue is "the most visible one" in relations between Trump’s administration and Europe.

"Probably on this aspect the French president will want to remind [Trump] of the international engagement," de Marcilly suggested.

However, the contradictions on climate issue should not be allowed to undermine France’s relations with the United States as a long-term partner just because the current US administration disagrees with the policy of Paris, Rapnouil stressed.

"There is a view that if we can't have this administration change position, better if we still can work with other US actors so that some part of the US does participate in climate change international policies. And hopefully one day we will have an interlocutor within the Trump administration (or another one) who will be able to change position and re-enter the Paris agreement framework," Rapnouil said.

Marie-Cecile Naves, in her turn, is sure that Macron would not be able to change Trump’s viewpoint on the climate issue.

"Trump will not change his opinion regarding this [climate] matter. And it’s not up to Macron to make him change it," Naves said.

She explained though that the withdrawal of the United States from the Paris climate accord will not happen overnight and will take some time.

"And we don’t know what will happen in the USA from now to 2020, whether Trump will still be in power. So there are many things that can happen, but there will be no re-negotiation of the climate change and Macron will not succeed in changing Trump’s opinion, I don’t think so," she reiterated.

Rapnouil reminded of the visit of Russian President Vladimir Putin, who arrived in Paris in late May at the invitation of Macron, just two weeks after Macron officially assumed the office.

"You can see that Macron is definitely willing to use this kind of symbolic and historical opportunities to do foreign policy and to build the context for the relations with global leaders. He’s done that with Putin and now he’s doing this with Trump," the expert said, adding that the invitation of Trump seems "parallel" to the invitation of Putin.