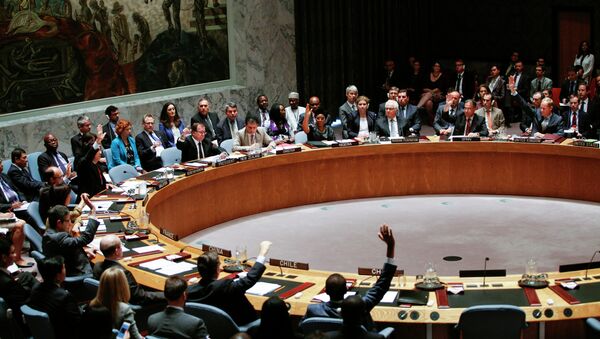 © AP Photo / KENA BETANCUR
Subscribe
Japan along with other stakeholders continue their work on a new UN Security Council draft resolution on North Korea which will hopefully present a strong response to recent missile launches by Pyongyang, according to Japanese Ambassador to the United Nations Koro Bessho.

"We are going through the stage of trying to find the best way of responding to North Korea," Bessho said on Wednesday. "I mean, we are looking for a robust resolution obviously but I can't predict what will be the outcome at this stage."

He added that bilateral meetings between representatives of Japan, United States and South Korea during the recent G20 summit in Germany were very instrumental for the work on the draft.

On Tuesday, a representative of the Russian mission to the United Nations said Russia would have to study the draft resolution, once it is officially submitted to the Council, before giving its opinion on it.

Last week, leaders of the United States, Japan and South Korea met on the sidelines of the G20 summit in the German city of Hamburg and agreed to press for prompt adoption of a new resolution by the UN Security Council that would impose additional sanctions on North Korea. France and the United Kingdom have also called for new restrictive measures against Pyongyang.

On July 4, North Korea announced it had successfully launched its first intercontinental ballistic missile, saying it traveled 580 miles and reached an altitude of 1,740 miles during its 39-minute flight before accurately hitting a targeted area in the Sea of Japan. The test was sharply criticized by the international community