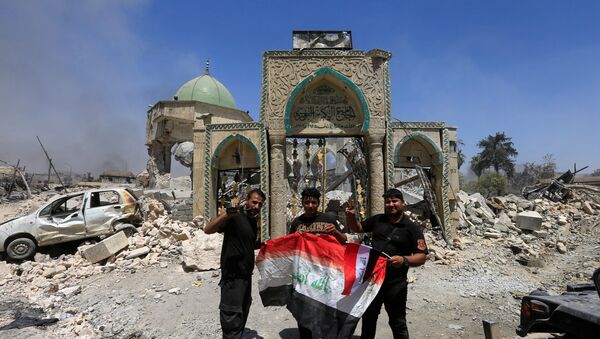 © REUTERS / Alaa Al-Marjani
Subscribe
The liberation of Mosul from Daesh terror group (outlawed in Russia) opens the way to a potentially dangerous collision between Iran, Syria and Hezbollah against Saudi Arabia, Israel and their allies backed by the United States, analysts told Sputnik.

WASHINGTON (Sputnik) — Mosul fell under control of terrorists in 2014 and was since then Daesh key stronghold in Iraq. The operation to recapture the city was launched in October 2016 by the Iraqi troops backed by the US-led international coalition.

Two US Citizens Killed in Syria Fighting Daesh With Kurdish Forces
The eastern part of the city was liberated in January, and on Sunday, the Iraqi armed forces regained control over the rest of the city.

On Monday, Iraqi Prime Minister Haider al-Abadi flew to a military base near Mosul to proclaim the capture of the city. However, airstrikes, shelling and other heavy clashes continued to erupt in western Mosul on Tuesday in renewed fighting, despite Abadi’s claim of victory in Iraq's second-largest city.

Amnesty International said the battle to liberate Mosul had already proved to be e a "civilian catastrophe" and estimated more than 5,800 noncombatants had been killed in the western part of the city. Amnesty also accused US-led coalition forces of violating international law, but the US commander of those forces rejected the charge.

Foreign affairs analyst and political commentator Dan Lazare told Sputnik on Tuesday that the fall of Mosul would not lead to rapid peace and stability in the region, but would open the way to a potentially very serious clash between Syria and Iran against the Saudis and their allies instead.

"The liberation of Mosul is obviously a triumph for the Abadi government. But now that the Islamic State is fading, the upshot is likely to be a stepped-up international showdown in Syria," Lazare said.

However, the resurgence of the Syrian government and the important role played by Shia militias in Iraq in rolling back Daesh offer Iran and Syria the chance to link up on a continual secure corridor through Iraq, Syria and southern Lebanon all the way to the Mediterranean, Lazare pointed out

"Iran's goal [is] to open a supply corridor through Iraq and on to western Syria and southern Lebanon," he said.

However, Saudi Arabia and Israel were both enemies of Syria and both countries feared such a westward extension of Iranian influence, Lazare remarked.

"The Saudis and Israelis are both opposed, one because it would strengthen the ‘Shi'ite crescent’ and the other because it would reinforce its arch-enemy Hezbollah. Both are therefore determined to stop it, which means the United States is too," he said.

EU Plans to Ensure Deal on Iran Implemented Fully by All Sides - Mogherini
If Iran and Syria could succeed in establishing such a coherent corridor across their territories and northern Iraq over the next few months, then Saudi Arabia and Israel backed by the United States could face different possible responses, but most of them involved high risk deployments in Syria and Iraq that could rapidly lead to military clashes, Lazare warned.

Lazare said the geography of the region limited the military options that the United States and its allies could pursue in Syria to try and prevent establishment of firm Syrian government control over the disputed territories, supported by Hezbollah and Iran.

"So what will they do? Try to head off a Shi'ite advance at Deir ez-Zor in eastern Syria on the Euphrates? Step up bombing of Syrian government forces in Daraa province in the extreme southwest? Or channel aid to Al Qaeda-led forces in Idlib province in the north?" he suggested.

Trump has vowed to contain Tehran even while he is under intense political attack at home for his efforts to seek improved relations with Russia, Lazare acknowledged.

"It is hard to believe that Washington will do nothing as Iran extends its security umbrella all the way to the Mediterranean," he said.

Trump’s enemies on both left and right in the United States were openly opposed to Iran and try and force him into taking military actions against it, Lazare cautioned.

"If [the US government] does nothing, the Democrats and neocons… will have a field day accusing Trump of doing Putin's bidding while the CIA will no doubt dig up yet another email pointing to the Trump campaign's ‘collusion’ with Russia," he said.

However, Trump’s options to counter the growth of Iranian influence through Syria were very limited short of war, Lazare noted. He had already exercised the option of firing cruise missiles against a Syria airfield and any attack by the United States or allied aircraft against Syrian or Iranian aircraft risked provoking a full-scale war with either of those countries.

"Trump will be under intense pressure to respond. But how — by shooting down another Syrian jet or bombing another Syrian air field? World wars have started over less," he recalled.

Egyptian Foreign Minister, Saudi Deputy Foreign Minister Discuss Qatar Crisis
Lazare compared the growing tensions between the two major strategic alignments in the Middle East as comparable to the confrontations between huge international alliances that set off World War I after the assassination of the Austrian Hapsburg heir Franz-Ferdinand in 1914 in Sarajevo.

"Indeed, it seems just like someone was taking a potshot at a couple of Hapsburg's in Sarajevo," he said.

Lazare warned that any relatively small incident or future terrorist attack or assassination could set off a far wider clash of the rival coalitions across the region.

While Shia-Sunni and pro-Iran versus pro-Saudi and Israeli tensions mounted in the Middle East, Daesh was likely to continue to pose an international terrorist threat for some time to come, Independent Institute Center for Peace and Freedom Director Ivan Eland warned.

"The taking of Mosul undermines the Islamic State's claim to run a caliphate, but it does not end the threat. The group will go back into guerrilla/terrorist status and continue fighting," he said.

Eland predicted Daesh would try and revert to terror attacks around the world to compensate for the loss of its heartland areas held over the past three years in Iraq and Syria.

"Continued terror attacks outside the Iraq/Syria theater including the West are likely. The threat will not be eradicated until the underlying causes are alleviated," he advised.

Eland therefore warned that that IS would encourage further terror attacks by its supporters throughout Europe and elsewhere in the coming months.

000000
Popular comments
We understand that some us interests want to use Saudi Arabia for money laundering and their military for wars by proxy. The question is why these same us interests do not want to trade peacefully. There are other valuable things in the world besides weapons, for example energy technology.