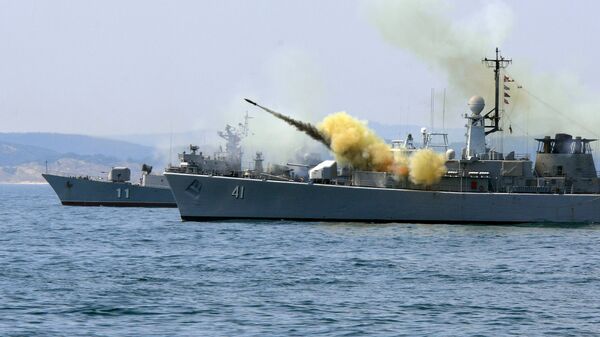 © AFP 2023 / VELKO ANGELOV
Subscribe
International
India
Africa
The Sea Breeze 2017 international naval exercise, involving the United States and Ukraine, kicked off on Monday in the northwestern part of the Black Sea and in the regions of Odessa and Mykolaiv.

US-Ukrainian Sea Breeze Military Drills in Black Sea Involve Over 3,000 Troops
The war games gather representatives of military forces from a total of 16 states to practice a multinational naval security operation in a crisis region, according to a statement by the Ukrainian Defense Ministry.

The exercise is organized in the free play format and commanded by a headquarters established in accordance with NATO standards. The drills will end on July 23.

Over 30 warships and 25 aircraft and helicopters are involved in the drills. The US military is represented by the USS Hue City missile cruiser, the USS Carney missile destroyer, a P-8A Poseidon anti-submarine plane and some 800 personnel.

The port of Odessa is also hosting several NATO warships, including a Turkish frigate and a Romanian corvette. From the Ukrainian side, some 10 warships and boats are involved.

Ukraine Abandons Short-Term NATO Membership Goal to Focus on Reforms
Moreover, two NATO military transportation aircraft arrived in Odessa, including a C-130J Hercules of the US military and a Hungarian C-17A Globemaster III, carrying military divers and dozens of other specialists.

Fueling the Situation in the Black Sea

Despite the new format, this year’s drills, like in the previous years, are maritime-focused, practicing air defense, anti-submarine, search and rescue operations and are aimed at strengthening cooperation among allies to ensure stability in the Black Sea region.

US, Ukraine 'May Practice Seizing Territories' During Joint Drills in Black Sea
According to RIA Novosti political commentator Alexander Khrolenko, such a show of force is directed against Russia, particularly against Crimea, and these military activities by the US and NATO near Russia’s border are "concerning."

"The two ships could provide Ukraine with the support of a total of 212 missiles, apart from torpedoes and artillery. This is too much for 'ensuring stability' in the region, especially taking into account that the region is stable. Possibly, the real goal of the US involvement is to fuel tensions in the Black Sea," Khrolenko wrote in an op-ed.

Meanwhile, Russia’s Black Sea Fleet said its forces will keep an eye on the exercise.

"The Sea Breeze drills will be permanently monitored by the Black Sea Fleet, including with the use of aerial reconnaissance and ground-based stations," a military source told Sputnik.

Moreover, the entire area of the Black Sea is covered by Russia’s Bastion coast-based missile systems.

Russian military expert and journalist Viktor Baranets suggests that Ukraine may be using the Sea Breeze 2017 drills for its own interests.

"There is one very important moment to be mentioned. Ukraine continues to engage the US in the tensions between Kiev and Moscow. This is a fact and this exercise indicates it. Provocations cannot be ruled out during the drills, including NATO warships crossing the borders vital for Russia’s interests. I guess that Ukraine may be preparing something like that. For Kiev, it would be very important to make Russia and NATO head-butt. This is Kiev’s strategic goal," Baranets said in an interview with Radio Sputnik.

According to the expert, to a certain extent the drills are sending an "anti-Russia message."

"NATO says that it protects the interests of Ukraine. This makes politicians in Kiev, including [President Petro] Poroshenko, happy. They are just like kids playing in a sandbox and waiting for some tough guy to come and protect them," Baranets pointed out.

He added that the Sea Breeze 2017 exercise can be regarded as a "NATO instrument to pressure Russia’s strategic frontiers."