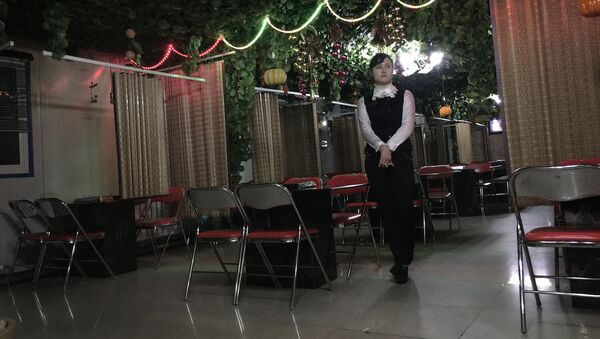 © AP Photo / Wong Maye-E
Subscribe
Republican men from the northeastern US are more likely to leave a big tip than representatives from other demographic groups, according to a new survey.

Results of a survey have been released revealing that male Republicans hailing from the upper lefthand corner of America are the demographic most likely to tip generously, possibly due to a mistaken belief in the viability of trickle-down economics — or maybe it's just simple guilt.

Either way, men who vote Republican and were either born in, or currently live, in New England and its environs consistently leave bigger tips, according to a Princeton Survey Research Associates study conducted on behalf of content-aggregation website CreditCards.com, cited by Bloomberg.

Expressed as percentages of a total restaurant bill, the new survey found that women tip around 16 percent, while people from the southern reaches of the US — and Democrats — usually give about 15 percent.

But in the course of the survey covering some 1000 US adults it was revealed that male Republican northeasterners, if paying with a credit card, left the highest tip amount: 20 percent.

The same demographic, however, when paying cash, only gave 15 percent on average, according to Bloomberg.

Some 50 percent of study participants asserted that they ordinarily tip between 15 and 20 percent, but about 20 percent confessed to occasionally leaving no tip, if they felt the move was justified.

Tipping is much more common in the US than the rest of the world, and is also a crucial portion of income for service workers, who are often paid a meagre base salary.

If a worker in the US receives tips, the federal government-allowed minimum wage is just $2.13, although Alaska, California, Oregon, and several other states legislate a higher minimum wage for tipped employees than the Fed.

Tipping is also known to discriminate by gender, as a "typical full-time, year-round female server is paid just 68 percent of what her male counterpart is paid ($17,000 vs. $25,000 annually)," according to a 2012 Restaurant Opportunities Centers United report.

"The gender pay gap is even larger for women of color. Black female servers, for example, are paid only 60 percent of what all male servers are paid," according to the 2012 report, which noted that women of color were more often employed at fast-food chains, which typically do not accept tips, as opposed to expensive restaurants, where the bills are much higher, and the tips generally follow.

The new Creditcards.com survey also revealed that 31 percent of participants never tip hotel housekeepers and that 30 percent never tip coffee shop employees, especially if the order is to go.

Barbers and hair stylists were only stiffed by 12 percent of poll participants, and women tip more often in these situations then do men.

For those who see the same faces everyday at the office and have never worked in a service environment, tipping 20 percent of the total bill may seem extravagant. But service workers see everybody, everyday, and they deal with every walk of life.

Tip service workers as much as you can — it's always the right thing to do.