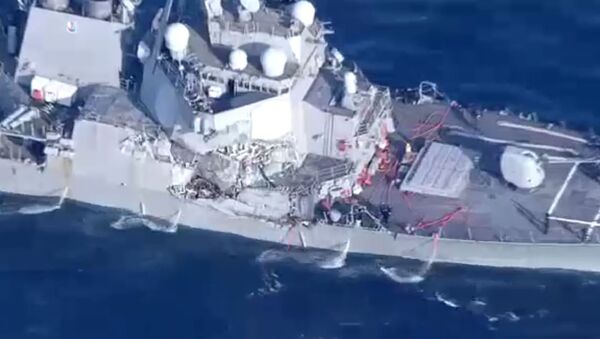 © NHK
Subscribe
International
India
Africa
A US Navy captain has been relieved of his duties after his warship was struck mid-ocean by a cargo ship, killing seven sailors.

Following the USS Fitzgerald's mid-ocean collision with a container ship nearly four times her size, the damaged ship's commander was temporarily relieved of his duties and his ship moved into a dry dock in Japan to assess the hull and make necessary repairs.

The Fitzgerald, a US Navy destroyer, was struck amidships on her starboard side by the MV ACX Crystal container ship early in the morning of June 17, about 125 miles southwest of Tokyo, Japan. Seven US sailors were killed in the accident.

The captain's cabin was severely damaged, as was much of the superstructure. Three crewmembers, including the captain, were medevaced off the ship.

There were no reported injuries aboard the Philippine-flagged ACX Crystal.

Following the accident, the US Navy destroyer, under command of her executive officer, returned to Japan under her own power assisted by tugboats, ships of the Japanese Coast Guard and the USS Dewey, a US Navy guided-missile frigate.

At a June 17 news briefing, Joseph Aucoin, a 7th Fleet Commander vice admiral, stated that the captain's quarters were among many areas of the Fitzgerald that were significantly damaged.

While the condition of the Fitzgerald's captain has not been disclosed, citing privacy issues, Aucoin observed that, "His cabin was destroyed," Stars and Stripes reported.

"He's lucky to be alive," added the vice admiral.

US Navy experts will "conduct assessments that will inform options for long term repairs" for the ship, according to a Monday statement.

On June 19 a US Navy damage controlman stated, "I think this was greater damage compared to the USS Cole," according to Stars and Stripes, referring to the suicide bombing in 2000 of the US Navy warship that killed 17 American sailors and injured 39.

Referring to the Fitzgerald, Aucoin asserted on June 17 that "The ship is salvageable."

"It will require some significant repairs," he added, suggesting that the Fitzgerald could be back on patrol in under a year.

Pacific Fleet Commander Admiral Scott Swift indicated that two ships were under consideration to temporarily replace the Fitzgerald while she is being repaired, but he declined to name them.

The "initial assessment [of the USS Fitzgerald] is going to take a couple weeks at minimum," Swift said.

The US Navy has announced a full investigation into the mid-ocean collision. Other groups, including the Japanese Coast Guard and the Japan Transport Safety Board, have signalled their intention to investigate the accident as well.