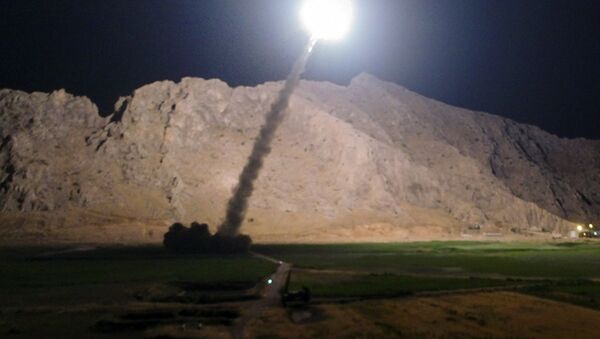 © AP Photo / IRIB News Agency, Morteza Fakhrinejad
Subscribe
A missile factory currently being built by Iran in Lebanon will be 50 meters below the ground and fortified against Israeli airstrikes, according to a report by the French media outlet Intelligence Online.

Israel Gearing Up for Attack From Hezbollah
According to the report, the factory will comprise of two facilities. The first facility, located in Hermel, in the eastern part of the Beqaa Valley, will manufacture Fateh-110 surface-to-surface missiles, with a range of up to 300 kilometers. The missile is capable of carrying a 400 kg warhead.

The other facility will be located on the Lebanese coast between the cities of Tyre and Sidon. The facility will manufacture missile parts that will be delivered to other factories, according to the report.

These missile factories in Lebanon have been a headache for Israel. The Israeli newspaper YediotAhronot recently published a report, citing Education Minister Naftali Bennett. According to the minister, Israel is considering a preemptive strike on them since Israel sees them as a threat.

Sputnik Persian sat down with Emad Abshenass, an Iranian political analyst and editor-in-chief of Iran Press newspaper, to discuss the situation.

"As a sovereign state Lebanon can do that and no one has the right to meddle in its affairs, including Israel. Lebanon is building a missile factory to defend itself against external threats, whether they are Israeli strikes or Daesh attacks," the expert said.

He suggested that Israel’s threat to attack the missile factories in Lebanon is rhetoric because the Israeli military is incapable of destroying them.

"Moreover, if Israel decides to do that it would face a tough response from Lebanon. In turn, Iran, as one of Hezbollah’s main allies, would also engage and provide the Lebanese military with support. But I think Israel is unlikely to do that," Abshenass said.

Syrian General Reveals Possible 'Israeli Plan' in Syria
Another reason for Israeli concerns is that Iran is considering establishing a transportation route to deliver weapons to Damascus from the production sites in Lebanon. Bennett stressed that Israel will not let Iran implement the initiative.

Abshenass noted that in fact such a corridor was established long ago and has played an important role in maintaining Tehran’s presence in Syria.

"Iran’s active engagement in Syria and Iraq has significantly helped the Syrian Army in the fight against Daesh. In fact, Iran’s involvement helped disturb the plan of the United States and Israel to divide Syria and Iraq. This is why Israel is looking for an excuse to justify its strikes on Syria’s territory," the expert said.

000000
Popular comments
He suggested that Israel’s threat to attack the missile factories in Lebanon is rhetoric because the Israeli military is incapable of destroying them. ----- Poor old Israel, are you seeing you Greater Israel Empire Plan going down the drain?
leyshon9
11 July 2017, 16:33 GMT3
000000
What israel will do, attack Lebanon again.......with the same 2006 result.. :)