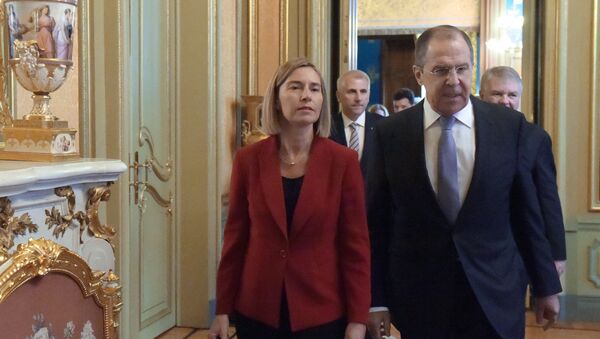 According to the EU foreign policy chief, the European Union intended to achieve the full implementation of the agreement on Iran by all parties concerned.

Joint Commission Meeting on Iran's Nuclear Deal to Take Place Next Week - Moscow
BRUSSELS (Sputnik) – EU foreign policy chief Federica Mogherini said on Tuesday that the European Union intended to achieve the full implementation of the agreement on Iran by all parties concerned.

"We will ensure that the engagement with Iran will continue and that the deal will be implemented in all its parts by all. This means the nuclear part, this means also all the rest – like the lifting of sanctions, as you know, and gradual re-engagement in all sectors," Mogherini said at a press conference after the meeting with Russian Foreign Minister Sergei Lavrov.

She noted that there was an ongoing review of the policy toward Iran in the United States.

"We respect it but we have also the duty to make it clear — the nuclear deal does not belong to one country, it belongs to the international community, to the United Nations system, it was endorsed by the UN Security Council with a resolution, and I think we share responsibility to make sure that this continues to be implemented fully by all," Mogherini stressed.

Signed in 2015, the Joint Comprehensive Plan of Action has been in effect since January 2016. The deal between Iran and the P5+1 countries, namely China, France, Russia, the United Kingdom, the United States plus Germany, stipulates the limiting Tehran's nuclear program in exchange for the gradual lifting of international economic and diplomatic sanctions imposed on Iran.