China Sends a Strong Signal About Its Geopolitical Interests in Syria 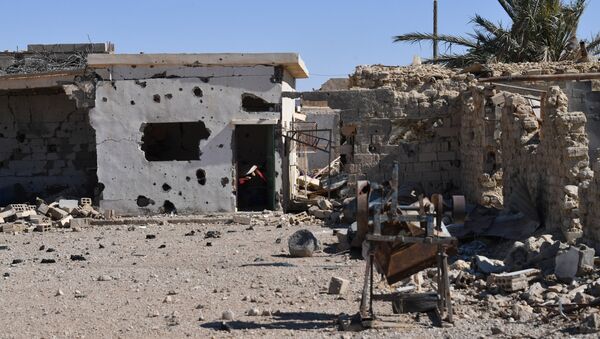 China plans to invest almost $2 billion in the Syrian industrial park; while some observers believe that it's not the time to mull over such high-yield projects, others say that China has sent a strong signal about its geopolitical interests in Syria.

'Assad Mustn't Go': How Qatar, France, Germany 'Wised Up in Regard to Syria'
China is intending to invest $2 billion in the creation of an industrial park in Syria that will initially bring together 150 Chinese companies, Qin Yong, the deputy chairman of the China-Arab Exchange Association, announced Sunday during the first Syria reconstruction projects fair in Beijing.

The project is being enthusiastically discussed by the government of Syria and the country's diplomats in China. On the same day, Syrian Ambassador to China Imad Moustapha confirmed that China, Russia and Iran will have priority over other participants in implementing economic initiatives and projects in Syria.

Speaking to Sputnik China, some experts expressed doubt regarding the timeliness of such initiatives, while others highlighted that by announcing its new initiative Beijing has sent a strong signal about its geopolitical interests in Syria to the international community.

It was also reported that China is planning to take Syrian aircraft and vessels on lease for its future economic activities. Chinese companies will be provided with the necessary legal support in the sphere of investment, construction and banking operations by a special commission on legal issues and investments in the restoration of Syria.

This commission was reportedly created by the Syrian Embassy in China together with the China-Arab Exchange Association and the Beijing-based Shijing law firm. The corresponding document was signed on July 4 in Beijing becoming yet another confirmation of China's serious political intention to stimulate business in Syria.

However, Chen Fengying, a research fellow at the China Institutes of Contemporary International Relations, believes that the primary goal is to stop the war in Syria.

"For Syria, the most important matter is to stop the war and solve the problem of the armed opposition, and only in the second place to restore the infrastructure," Chen told Sputnik China.

Soft Power: Chinese Enterprises Delegation Expected in Syria
"I believe that it is still too early to speak about the creation of an industrial park," he continued, "Almost everything in Syria now needs restoration. Roads and house have been destroyed there, and only after restoring infrastructure and solving problems related to providing the population with food, we can talk about the restoration of production."

Therefore, the expert emphasized, it is extremely difficult to assess the risks associated with the announced project at the present time.

"Syria is located along the Silk Road," Chen highlighted, "If the situation in this country stabilizes, we will be able to invest in various sectors of Syria's economy within the framework of the project 'One Belt, One Road'."

Speaking to Sputnik he stressed that the restoration of Syria's infrastructure is the priority. He added that the revival and development of the country's economy are of utmost importance.

"As for investments in high-yield spheres of industry, agriculture, transport of Syria, the provision of such a possibility by the Syrian government will depend on whether China or some other country will actively participate in the first phase [of reconstruction projects] aimed at creating proper conditions for the population. For sure, the government of Syria will give preference to those who will actively engage in the reconstruction of destroyed infrastructure," Kurtov said.

World
Beijing, Damascus Discuss Launching Direct Flights to Top Chinese Cities
For his part, Vladimir Evseev, the head of the Department of Eurasian Integration and Development of the Shanghai Cooperation Organization (SCO) at the Institute of CIS countries, believes that China's willingness to invest in Syria means that the end of the conflict is not far off.

"China really does not want to be left behind — it wants to play a substantial role in the resolution of the Syrian crisis. It has waited for a long time: it was not sure that Russia's actions would lead to the result that was ultimately achieved. China has become increasingly involved in solving the Syrian problem in order to provide the most favorable conditions for business," Evseev elaborated.

Evseev recalled that before the crisis China controlled a significant part of Syria's oil and gas. Tens of billions of dollars were invested there, the expert pointed out. Predictably, China wants to continue to maintain control over the country's energy sphere.

"Perhaps, we are talking about some 'corridors of economic influence'. China has made a principal decision to take part in the settlement of the Syrian crisis, both politically and economically. This can also be accompanied by limited involvement in the military sphere in order to test its weapons," Evseev suggested.

China officially got involved in Syria last year by appointing its special representative for the country. Furthermore, Beijing combines its diplomatic efforts with the provision of humanitarian aid to the Syrians.

Syria remains high on the agenda in Beijing. In particular, observers draw attention to the fact that on January 18, 2017, Chinese President Xi Jinping for the first time highlighted China's contribution to the Syrian settlement.