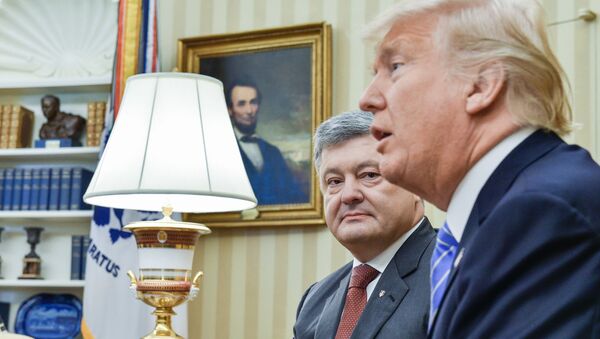 © Photo : President of the Ukraine Press-Service
/
Go to the photo bank
Subscribe
In order to begin to resolve the crisis in Ukraine, the US appointed a Special Representative for Ukraine Negotiations. In an interview with Radio Sputnik, political expert Stanislav Byshok revealed the reasons behind Washington's decision.

According to Byshok, the US' main goal is to officially take part in the peace process and further influence developments in Europe and Ukraine.

"The main goal of the Americans is simply to be in, rather than achieve any real improvements. There are many proposals coming from Poroshenko, Macron and others, including those about the new format [of negotiations], about new agreements. But no one actually asks: who is to blame for not fulfilling the political part of the Minsk agreements? Instead of saying what exactly Ukraine has failed to fulfill, they just say that the Minsk agreements do not work," Byshok said.

At the same time, Byshok noted that the US doesn't view Kiev as a reliable negotiator when it comes to the resolution of the Ukrainian crisis.

"This is a very important point. Despite the fact that in his speech in Kiev Rex Tillerson criticized Russia for allegedly not having done enough to settle the crisis in the Donbass, the US special representative was sent not to Russia, but to Ukraine. Thus, the US does not see Ukraine as a reliable partner in the framework of this process," Byshok concluded.

Ukraine Hopes to Receive US Support in Settlement of Donbass Conflict
Earlier, US Secretary of State Rex Tillerson said that the United States is disappointed with the lack of progress in the implementation of the Minsk agreements, which is why Washington appointed Kurt Volker as Special Representative for Ukraine Negotiations.

In February 2015, the warring parties to the Ukrainian conflict in Donbass signed the Minsk peace accords in order to cease fire in the crisis-torn region. Germany, France, Russia and Ukraine, as the members of the Normandy Four, helped negotiate the Donbass ceasefire. The truce, however, has been repeatedly breached, with Kiev forces and Donbass militia accusing each other of violating it.