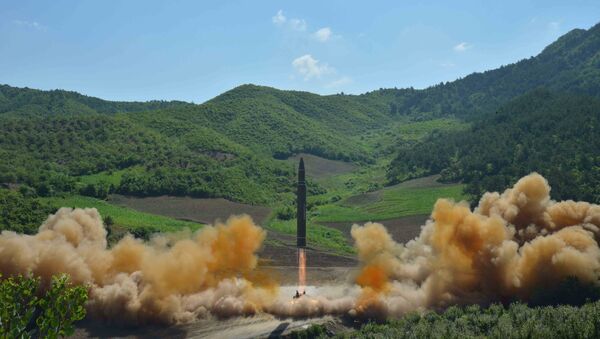 © REUTERS / KCNA
Subscribe
International
India
Africa
The head of the US’ nuclear arsenal said Sunday that Washington isn’t responding to North Korea’s alarming missile test quickly enough. US Strategic Command (STRATCOM) chief Gen. John Hyten remarked that if the US is going to keep up with North Korean leader Kim Jong-un, it has to be willing to take more risks.

"Kim Jong-un has gone very fast, and we have to step up and go fast in response. We are not going fast. We are so risk-averse that we only test every 18 months," hinting that Washington should take note of how failure doesn’t seem to faze Kim.

Pointing out how the persistent leader is unbothered by US headlines meant to embarrass him, he said in an interview with Stars and Stripes, "We’ve seen things like, 'He launches and fails, launches and fails. [Kim] is a fool. He doesn’t know what he is doing,'" but Hyten suggested "that is actually the way you build rockets. The best way to build rockets, the best way to move fast, is to build it, test it, instrument it, learn from your failures."

North Korea announced on Tuesday that it had conducted a successful missile launch, immediately setting off international alarms with suggestions that Pyongyang has developed an intercontinental ballistic missile (ICBM) capable of reaching Alaska or the US Pacific Northwest.

In response, South Korea and the US conducted live-fire drills Saturday, simulating the destruction of underground facilities and an enemy ballistic missile. The drills included two B-1B Lancer strategic bombers, joined by jet fighters from the US and South Korea after leaving a US base on Guam.

The North condemned the drills as a "dangerous military gambit of warmongers who are trying to ignite the fuse of a nuclear war on the peninsula," warning the two allies in the state-run Rodong Sinmun  newspaper not to "play with fire on a powder keg."

Some analysts believe the the Democratic Republic of Korea (DPRK) could develop a nuclear weapon capable of striking the US mainland in as little as two years.

"If you want to be able to respond to a threat that is going fast you better be able to figure out how to go fast," Hyten said, adding that "You sometimes learn more from failure than you do from a success… We have somehow forgotten that."