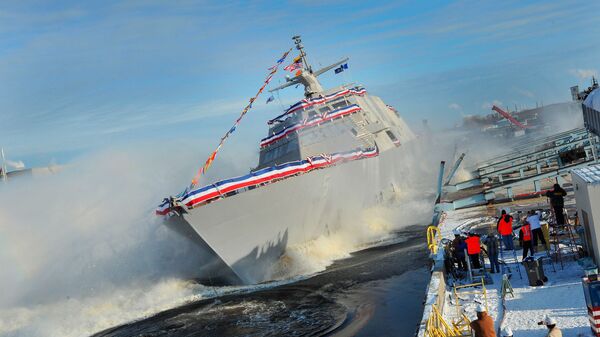 © AP Photo / Lockheed Martin
Subscribe
International
India
Africa
The US Navy has turned to defense manufacturers with a request for information (RFI) that could signal the death knell for a Littoral Combat Ship program that never quite got legs.

The service can’t seem to make up its mind as to whether to commission littoral combat ships, modified littoral combat ships or frigates. And it’s now opened up the competition, seeking — in the interest of expediency — existing designs that can be modified to fit the Navy’s needs, Defense News reported.

The last frigates were decommissioned in 2015, but the program to replace them has been a major dud. The Navy once planned to field 52 LCS-baseline ships to retire its time tested Oliver Hazard Perry-class frigates. But former Defense Secretary Ashton Carter ordered the Navy to cut the number of ships down to 40 in December 2015.

The Congressional Research Service released a report in April of this year declaring 26 close-shore attack ships had been funded. But contractors Lockheed Martin and Austal USA completed less than 30 percent of the ships they were paid to produce.

“Whereas the program expected to deliver all 55 ships in the class by fiscal year 2018, today that expectation has been reduced to 17 ships,” the watchdog noted.

The Government Accountability Office, in turn, reported in December 2016, “our recent work has shown that the LCS business case continues to weaken.”

Notably, the LCS ships being developed right now “have exceeded contract cost targets, with the government responsible for paying a portion of the cost growth.” In nominal terms the Navy has asked for US taxpayers to throw in another $246 million to cover cost growth for twelve of the apparently troubled ships, the GAO added.

Nevertheless, Lockheed Martin claims “affordability” to be a major selling point of the ships they’ve struggled to construct.

The LCS program was supposed to be the next generation of warships to escort aircraft carriers, track submarines and drown enemy combat vessels, as military analysts foresaw a future battle space in which combat would occur closer to shores. This is where LCS vessels were supposed to thrive. The willingness, finally, to consider scrapping the program suggests that vision may have been little more than an effective ideology to support an expensive new program.

The government’s request to map out a new small surface ship is “an effort to get the design right up front,” Read Adm. Ronald Boxall told Defense News on Monday.

“We’re looking to have a dialogue with industry to get the most capability for the best price.”