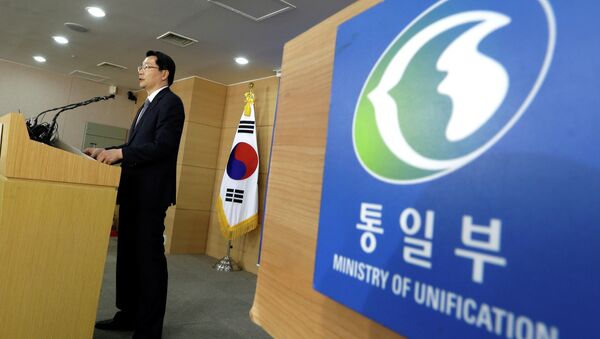 Asia
South Korea Receives New Submarine Amid Escalating Tensions With Pyongyang
MOSCOW (Sputnik) — Seoul has suspended aid to its northern neighbor through United Nations agencies after North Korean nuclear and missile tests in 2016, but South Korean President Moon Jae-in told the G20 summit last week that humanitarian aid in the welfare and medical areas should not be linked to political issues.

"We have halted aid provisions (via international organizations) since North Korea's 2016 nuclear and missile tests, but we are considering the resumption (of aid supply) on the condition of transparency and monitoring," Lee Duk-haeng was quoted as saying by the Yonhap news agency.

According to South Korea's Unification Ministry, the UN International Children's Emergency Fund (UNICEF) and the World Food Program have appealed to the government, asking to resume its support. Seoul has allowed civilian groups to provide aid to North Korea since Moon took office in May, but Pyongyang rejected to receive it due to latest UNSC sanctions against it.

Tensions between the two countries have risen in recent years amid Pyongyang's nuclear tests and ballistic missile launches, conducted in violation of UN Security Council resolutions. The dialogue with North Korea is a part of newly elected president Moon's policy, aimed at reconciliation on the Korean peninsula.