Iraqi Liberation of Mosul 'Decisive Blow' to Daesh - US General 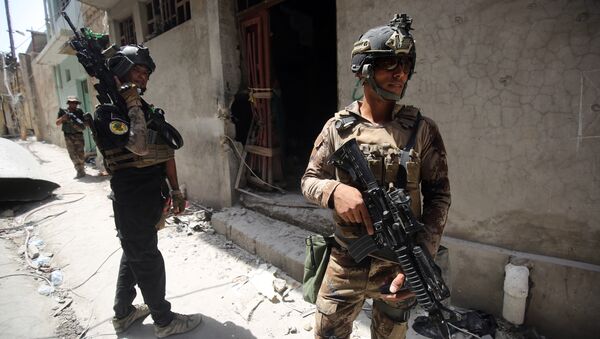 WASHINGTON (Sputnik) — On Sunday, the anti-terrorist unit of the Iraqi armed forces raised a national flag on the banks of the Tigris River in the historical part of the city of Mosul. The same day, Iraq's Prime Minister Haider Abadi arrived in Mosul to declare the city's liberation from Daesh.

"The global Coalition fighting [Daesh] congratulates Prime Minister al-Abadi and the Iraqi Security Forces on their historic victory against a brutal and evil enemy," Townsend stated. "…the loss of one of its twin capitals and a jewel of their so-called caliphate is a decisive blow."

Townsend added that Iraqi’s must unite to liberate the rest of the country from IS and prevent the country from falling back into conditions that allowed the terror group to rise. The US-led coalition will continue to work with the Iraqi Government to defeat IS in other parts of Iraq, Townsend stated.

Damascus Congratulates Iraq on Victory Over Daesh in Mosul
In 2014, Daesh captured vast territories in Iraq and Syria, declaring the establishment of a caliphate in the seized areas. Mosul has served as Daesh's so-called capital in Iraq since then. The Iraqi operation to liberate the city began in October 2016. In June, 2017, the Iraqi command announced the beginning of an offensive on the last fortifications of Daesh in the historical part of Mosul. The operation involved special troops, federal police, rapid reaction forces and the armed forces of Iraq.

On June 29, Abadi declared the recapture of Al Nuri Grand Mosque in Mosul, where the creation of the so-called Islamic caliphate was first announced by the Daesh leader in 2014. Abadi claimed it was the end to the organization’s existence. The same day, US-led coalition's spokesman Ryan Dillon said the full liberation of the city might be achieved within days.