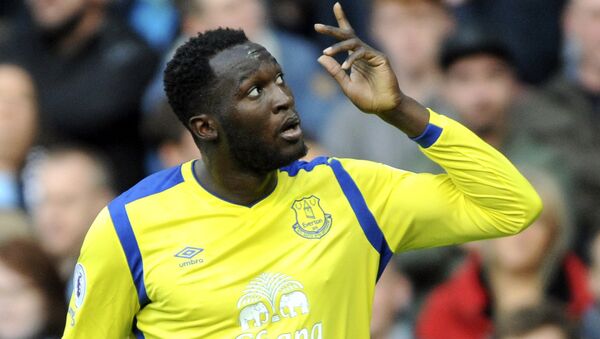 © AP Photo / Rui Vieira
Subscribe
Manchester United have agreed to buy Belgian footballer Romelu Lukaku for £75 million (US$97 million) and he has passed a medical over the weekend. It is quite a turnaround for United manager Jose Mourinho who sold him in 2014 when he was Chelsea manager.

I want to thank my teammates and the staff for helping me this season! To the fans thank you for your amazing support God bless you pic.twitter.com/FV22vJoCex

The deal is expected to be announced on Tuesday (July 11) after Mourinho arrives in the United States, where the team are due on a pre-season tour.

United have reportedly agreed to pay £75 million up front but the final deal could cost them up to £100 million (US$129 million). United are one of the richest clubs in the world, but they have not won the Premier League since 2013.

They won the Europa League cup competition in May and dedicated the victory to the victims of the bombing at the Manchester Arena earlier that month.

​Various accounts have been given about why Mourinho sold him to Everton for £28 million (US$36 million), including that he did not rate him or was impatient for a ready-made striker who could win the Premier League.

Instead he signed Diego Costa from Atletico Madrid and promptly won the Premier League with Chelsea.

"Romelu was always very clear with us with his mentality and his approach was not highly motivated to come to a competitive situation with Chelsea," said Mourinho, after selling him to Everton.

"He wanted to play for Chelsea but he clearly wanted to be first-choice striker — but for a club of our dimension it is very difficult to promise to a player," he added.

Last summer United broke their transfer record when they signed Paul Pogba for US$100m. He was another "prodigal son," having been allowed to leave on a free transfer in 2012, when Sir Alex Ferguson was United's manager.

​Pogba went to Juventus, turned into a world-class midfielder and was eventually signed by Mourinho.

Lukaku and Pogba appear to have become good friends already, being pictured on social media in Los Angeles, where United are set to begin a pre-season tour.

Ironically just as the Belgian striker was making an emotional farewell to Goodison Park — posting a message on Instagram — the blue half of Merseyside was signing Wayne Rooney… from Manchester United.

I want to say a big thank you to all the people involved at @everton. I want to thank the fans for your support throughout the 4 years we've spend together. You guys helped me through all my games and I can proudly say it was an honour to play in front of you. To the staff at the the stadium and trainingground thank you for making me feel home from the first day i walked in. To my teammates it was great to play with you guys. To technical staff thank you for helping me become a better player. Working with you guys has been a pleasure and i'll take ur advice throughout the rest of my career. Thank you everton football club 💯

Both clubs insisted the deals for the two players were not connected, although Rooney will wear Lukaku's number 10 shirt.

Liverpool-born Rooney scored 15 goals in 67 matches for his boyhood club, Everton, before joining United in 2004.

While at Old Trafford he smashed the club's goal-scoring record with 183 goals in 393 games and won 16 trophies, including five Premier League titles. He also scored a record 53 goals in 119 games for England.

Rooney, who will be 32 in October, had been rumored to be lining up a multi-million deal in China, but he has opted to rejoin the Toffees, having always said they were the only club in Britain he would play for after United.

Excited to be back at @Everton. Can't wait to meet up with @RonaldKoeman and the lads! #EFC 🔵 pic.twitter.com/0CjD0i1aXg

​Lukaku is a very different player from Rooney.

He is six feet three inches tall, immensely powerful and good in the air and more of an out-and-out striker than Rooney, who often played in midfield.

But he is also only 24 years old, meaning his best years are ahead of him.

Lukaku was prolific for his first club, Anderlecht, scoring 33 goals in 73 appearances, but failed to hit the net for Chelsea, which may explain why Mourinho let him go to Everton.

​"I don't want to stay at the same level. I want to improve and I know where I want to do that," said Lukaku, who was also being chased by his old club Chelsea, the Premier League champions, and their Italian manager Antonio Conte.

Next summer he will hope to line up for Belgium in the World Cup in Russia. They are currently top of their group and can virtually seal qualification with victory over tiny Gibraltar next month.