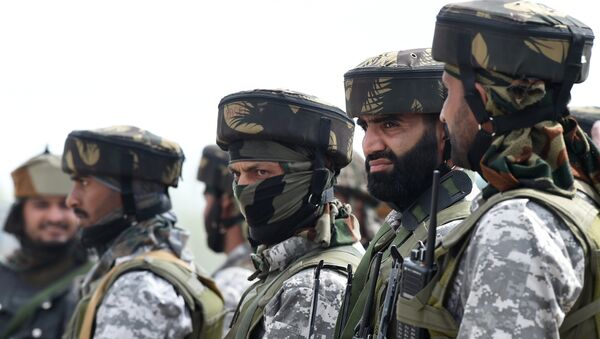 India is likely to close an Army unit established in 1947 to provide basic education to troops. An 11-member committee has recommended the winding up the Army Education Corps (AEC) and deploy 5000 personnel to the war zone that will be advantageous to the forces.

NEW DELHI (Sputnik) — Set up in 2016, the committee, under the chairmanship of Lt Gen DB Shekatkar (retired), was tasked to recommend measures to enhance combat capability and rebalance defense expenditure of the armed forces. This personnel will be deployed along China and Pakistan border as the member of cyber agency and help in flying unmanned aerial vehicles in difficult Himalayan terrain for surveillance purposes.

"The AEC should be closed as a Corps over the next five years and its existing manpower should be re-oriented and re-skilled to form part of the cyber warriors, various electronic surveillance, and intelligence as well as electronic warfare unit or trained as Unmanned Aerial vehicle operators," the Committee said in its report to the government.

The Defense Ministry has approved most of the recommendations in March this year and now it seeks services chief approval to implement the recommendation from this year itself. "Presently, officers and JCOs of the Army Education Corps are not utilized optimally. The Corps was established at the time when troops were not literate. But, now most of the troops are well educated. Classes have been cut down drastically. Approximately 5000 personnel are engaged in the education corps and have not been fully explored & utilized," Major General Ravi Kumar Arora (retired), chief editor of Indian Military Review, said.