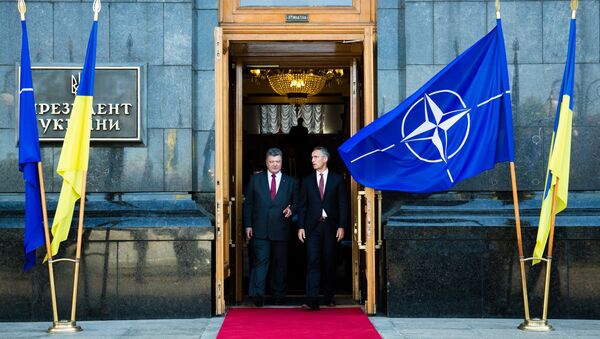 © Sputnik / Mikhail Palinchak
/
Go to the mediabank
Subscribe
International
India
Africa
Even as the Ukrainian leadership stubbornly tries to bring the country into NATO’s fold, it appears highly unlikely that Kiev will be able to claim the alliance membership in the foreseeable future.

Why Ukraine's New Law on NATO Accession is Not Really About NATO
Earlier Ukrainian President Petro Poroshenko signed a law that basically affirms Ukraine’s intend to become part of NATO.

According to a statement issued by Ukrainian president’s press service, the goal to attain NATO membership has now officially became one of Kiev’s key policies.

However, political scientist and Ukraine expert Oleg Onopko told Sputnik Radio that Ukraine merely confirmed its intent to integrate into the Euro-Atlantic structures.

"Ukraine confirmed its desire to integrate in the Euro-Atlantic direction, and emphasized for the first time that there’s no alternative for this development direction of the Ukrainian state.  It is important to note that it in many ways contradicts the basic paradigm of the Ukrainian constitution, which postulates that Ukraine should be a non-bloc state; now it is over," Onopko said.

According to him, Kiev now wants to legitimize its intent to join NATO, because even though many Ukrainians support this initiative, the vast majority of the country’s population either supports maintaining the country’s non-bloc status or advocates integration into the Eurasian security architecture.

The analyst also added that there’s also another important factor to consider.

"There will be a colossal undertaking aimed at reformatting the Ukrainian military and security forces; and there’s a chance that, under the de facto wartime conditions, the military will be able to get close to the NATO standards. But it should be noted that it won’t get Ukraine any closer to joining the alliance. A country that has an active armed conflict on its territory will never become a member of the alliance," Onopko explained.

He also remarked that at this point it is virtually impossible to determine exactly when Ukraine may actually join NATO, because two conditions need to be met in order for this to happen: namely, the conflict in Donbass must be resolved and Ukraine must not have any outstanding territorial disputes with Russia.

"At this time it is impossible to tell when these two conditions are met," Onopko surmised.