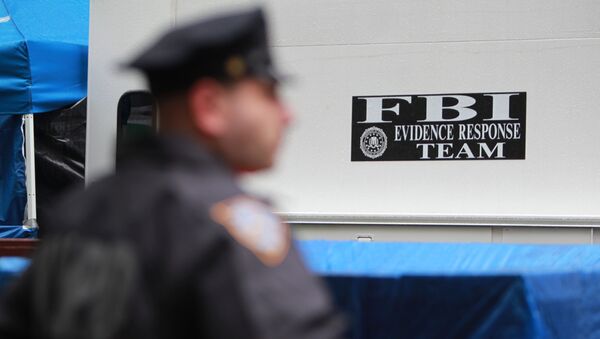 © AFP 2021 / MEHDI TAAMALLAH
Subscribe
An email received by the Minnesota chapter of the Council on American-Islamic Relations has been forwarded to the FBI with a request to investigate the sender for making violent threats and hate speech.

The email, which contained numerous threatening emotional expressions of hate, was received on Thursday evening and is not the first of its kind from the same sender, according to CAIR, the Minneapolis Star Tribune reports.

CAIR released the contents for the email in a news release.

"Hey there Muslim PIG SWINE. We MILLIONS upon MILLIONS of PATRIOTS, armed to the teeth with HUNDREDS of millions of weapons, with literally over 50 BILLION rounds of horrific, violent camel jockey piercing rounds of ammo. We have a LEADER in the White House, now standing for JUDEO-Christian values…You have mistaken European White Males patience for weakness. Get ready to have a war," Raw Story reveals.

Minneapolis, Minnesota, is part of a central-northern region of the US that is no stranger to anti-Muslim violence and expressions of white supremacy.

A local man was sentenced to one year in prison earlier this year for threatening to blow up an Islamic religious center in Minneapolis in 2015, according to Minnesota Public Radio.

A jury in May found a local man guilty of shooting and wounding two Somali-American men who were walking outside in Minneapolis.

The email, with its hate speech and threats of violence must be "investigated as a hate crime by law enforcement authorities and repudiated by state and national leaders," Hussein said, cited by the Star Tribune.

Founded in 1994, CAIR is a nonprofit Muslim civil rights advocacy group with branches in many cities across the US.

000000
Popular comments
With a Tel Aviv ip. lol I'm not sure if I consider emotional expressions of hatred as a crime. But harassment (form of terrorism) and threatening violence are crimes. But these articles are also profiling to check what response is received.
jas
9 July 2017, 04:00 GMT3
000000
As usual, no mention whatsoever in this article about Muslim hate against Christians as well as ordered by their religion to kill them.
tblizz
9 July 2017, 07:04 GMT2
000000
Newsfeed
0
New firstOld first
loader
LIVE
Заголовок открываемого материала
Access to the chat has been blocked for violating the rules . You will be able to participate again through:∞. If you do not agree with the blocking, please use the feedback form
The discussion is closed. You can participate in the discussion within 24 hours after the publication of the article.
To participate in the discussion
log in or register
loader
Chats
Заголовок открываемого материала
Worldwide
InternationalEnglishEnglishMundoEspañolSpanish
Europe
DeutschlandDeutschGermanFranceFrançaisFrenchΕλλάδαΕλληνικάGreekItaliaItalianoItalianČeská republikaČeštinaCzechPolskaPolskiPolishСрбиjаСрпскиSerbianLatvijaLatviešuLatvianLietuvaLietuviųLithuanianMoldovaMoldoveneascăMoldavianБеларусьБеларускiBelarusian
Transcaucasia
ԱրմենիաՀայերենArmenianАҧсныАҧсышәалаAbkhazХуссар ИрыстонИронауОssetianსაქართველოქართულიGeorgianAzərbaycanАzərbaycancaAzerbaijani
Middle East
Sputnik عربيArabicArabicTürkiyeTürkçeTurkishSputnik ایرانPersianPersianSputnik افغانستانDariDari
Central Asia
ҚазақстанҚазақ тіліKazakhКыргызстанКыргызчаKyrgyzOʻzbekistonЎзбекчаUzbekТоҷикистонТоҷикӣTajik
East & Southeast Asia
Việt NamTiếng ViệtVietnamese日本日本語Japanese俄罗斯卫星通讯社中文（简体）Chinese (simplified)俄罗斯卫星通讯社中文（繁体）Chinese (traditional)
South America
BrasilPortuguêsPortuguese
NewsfeedBreaking
06:53 GMTUK's Claims About Third Russian Involved in Skripal Case 'Another Lie', Foreign Intel Chief Says
06:42 GMTFormer Islamist Preacher: 'There is a Salafist in Every Swedish Mosque'
06:33 GMTAlgeria Closes Airspace to All Planes From Morocco Over 'Provocations'
06:28 GMTRussia Ready to Cooperate With New German Gov't Based on Mutual Respect, Ambassador Says
05:29 GMTUS Sanctions Suffocating Syrian People, International Community Must Act, Foreign Minister Says
05:09 GMTLebanese Public Hopes New Gov't Will Tackle Economic Crisis, But What are the Odds It'll Succeed?
04:32 GMTIndian Scientists' Experiment May Solve Treatment Puzzles of Neurological Disorders Like Alzheimer's
04:31 GMTModi Arrives for Visit in Washington, Welcomed by Diaspora, Foreign Ministry Says
04:30 GMTDon't Do That! Shiba Inu Worried Its Cat Buddy May Get Hurt
04:15 GMTLive Updates: India Records 31,923 COVID-19 Cases Over Past 24 Hours
04:09 GMTPhoto: Armored Vehicles, National Guard Appear on Texas Border Amid Abbott's 'Steel Wall' Deployment
03:58 GMTBannon Admits He Spoke With Trump About 'Killing' Biden Presidency Ahead of Deadly Capitol Riot
03:00 GMTWreckage of Disappeared An-26 Plane Found in Russia's Khabarovsk Territory - Source
02:20 GMTLavrov Holds 1st Meeting With Truss in New York Amid New UK Accusations in Skripal Case
01:49 GMTDHS Looks to Staff Gitmo Migrant Facility With Guards Who Speak Haitian Creole Amid US Border Surge
01:30 GMTRussian Crew Leaves Boat Pilgrim in Alaska, Will Renew World Trip Next Spring - Captain
01:00 GMTWall Street Up Broadly as Fed Signals Caution With US Stimulus Taper, Rate Hike
00:45 GMT‘This Moment Demands Action’: Biden Eyes Executive Actions After Fruitless Police Reform Talks
00:26 GMTMoroccan Liberal Parties Form Coalition Government, Ousting Islamists After Decade of Rule
00:00 GMTIAEA Must Have Access to Nuclear Fuel for Australian Submarines - Iranian Envoy