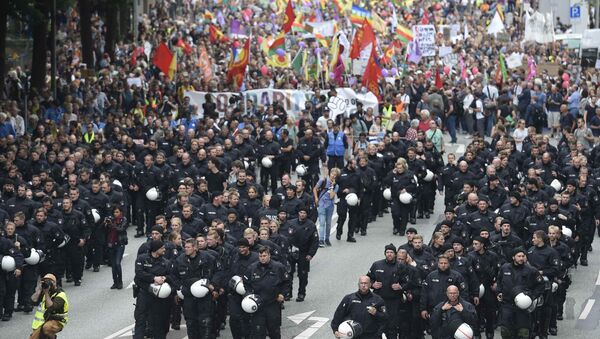 © REUTERS / Fabian Bimmer
Subscribe
German politicians from the Christian Democratic Union (CDU) and the Free Democratic Party (FDP) demanded to fundamentally change attitudes towards left-wing extremism after the violent protests in Hamburg that occurred on the days of the G20 summit, local media reported.

MOSCOW (Sputnik) — Anti-globalist rallies took place in Hamburg during G20 summit on Friday and Saturday, and some of them have turned violent. According to the local police, almost 50,000 people took part in Saturday's rally. A special police unit was brought in to clear streets from protesters. According to most recent reports, more than 200 law enforcement officers were injured in the clashes, almost 300 protesters were detained, about half of them were arrested. German Chancellor Angela Merkel strongly condemned violent protests.

"Nobody would get the idea to tolerate right-extremist centers easily. In case with left-sided centers,… people were often too reserved. This must change now," CDU Secretary General Peter Tauber said, as quoted by Bild am Sonntag.

Parliamentary State Secretary in the Federal Ministry of Finance and CDU member Jens Spahn said left-wing extremism needs the same clear answer as to Neo-Nazis. He also accused the Social Democratic Party of Germany, the Greens and the Left Party of trivializing left-wing violence.

Merkel Strongly Condemns Anti-G20 Violent Protests in Hamburg
Head of FDP Christian Lindner said he wants the left-wing extremist scene to be taken much more seriously by the German Federal Office for the Protection of the Constitution.

The Christian Democratic Union of Germany is a German center-right conservative political party. It has 254 of 630 seats in Bundestag and is in ruling coalition with the Christian Social Union (CSU). It also has 29 of Germany's 96 seats in the European Parliament. The leader of the CDU, Angela Merkel, is the current Chancellor of Germany.

The Free Democratic Party is a German liberal political party. It is currently not represented in Bundestag, but has three of Germany's 96 seats in the European Parliament.