The G20 From Hell 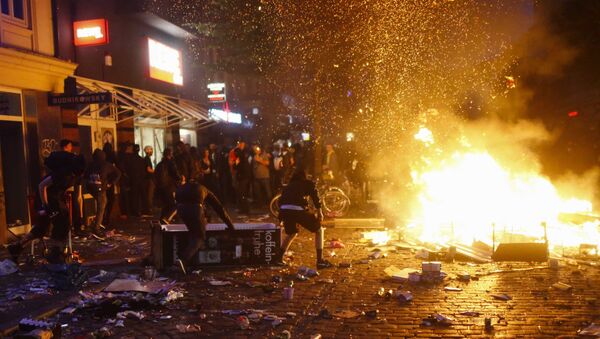 Pepe Escobar
All materials
A future history of the G20 in Hamburg might start with a question posed by President Donald Trump – actually his speechwriter – a few days earlier in Warsaw:

“The fundamental question of our time is whether the West has the will to survive."

What initially amounted to a juvenile/reductionist clash of civilizations tirade written by Stephen Miller – the same one who penned the "American carnage" epic on Trump’s inauguration as well as the original Muslim travel ban – might actually have founded some answers in Hamburg.

World
Results of the G20 Summit: Can a Consensus End the Wars in Ukraine and Syria?
The G20 as a whole was a noxious military dystopia disguised as a global summit. “Welcome to Hell” and other assorted protests, on multiple levels, were sort of answering another Trump-in-Warsaw question; “Do we have the desire and the courage to preserve our civilization in the face of those who would subvert and destroy it?"

While leaders worked the cosseted rooms, gossiped, listened to the Ode to Joy and indulged in the proverbial banquet, outside there was burning and looting; a sort of vicious, street-level commentary not only about their concept of “civilization” but also about Trump-in-Warsaw conveniently forgetting to say that it’s US and NATO’s “policies” which end up generating the terror blowback that threaten “civilization”, “our values” and our “will to survive”.

It will get worse. Starting next year, a Bundeswehr/NATO joint production, a ghost town built in a military training camp in Sachsen-Anhalt – incidentally, not far from Hamburg — will become a prime site teaching urban warfare. Austerity is far from over, and euro-peasants are bound to continue rebelling en masse.

The temptation is sweet to identify the emerging new order as a Putin-Xi-Trump-Merkel world. Not yet – and not yet as multilateral. What we’re seeing is the trappings of multilateralism, but not yet the real deal — resisted by Washington on myriad levels.

Frau Merkel wanted “her” summit to focus on three crucial issues; climate change, free trade and management of mass global migration – none of them particularly appealing to Trump, a believer in a Darwinian approach to global politics. So what the world got was an unexciting muddle through – inbuilt contradictions included.

The Boss, once again, was Chinese President Xi Jinping, calling on G-20 members to privilege an open global economy; strengthen economic policy coordination; and be aware of the enormous risks inherent in financial turbo-capitalism. He duly called for a “multilateral trade regime”.

To back it up, China deftly applied giant panda diplomacy – offering two of them, Meng Meng and Jiao Qing, to the Berlin zoo as a friendship gesture. Merkel’s commentary was not so cuddly; “Beijing views Europe as an Asian peninsula. We see it differently.”

Well, for all practical purposes what Chinese and German business interests do see further on down the road is Eurasia integration – with the 21st century New Silk Roads, a.k.a. Belt and Road Initiative (BRI) starting in eastern China and ending in the Ruhr valley. Now that’s a practical definition of how a “multilateral trade regime” should work. Add to it the just-clinched, massive trade deal between the EU and Japan. For all practical purposes, geopolitically and geoeconomically, Germany is moving East.

President Putin went one up – stressing financial sanctions under political pretexts hurt mutual confidence and damage the global economy. Everyone knows it, everyone agrees, but that element of Washington’s “our way or the highway” geoeconomic policy won’t vanish anytime soon.

And then we had the anti-globalization group Attac criticizing Merkel for staging a "cynical production"; as much as the chancellor was positioning herself as “leader of the free world”, the German government “is actually pursuing an aggressive export surplus strategy”. And here we had left/progressive Attac totally aligned with Donald Trump.

The sherpas in Hamburg were involved in their own brand of “Welcome to Hell”. Merkel’s euphemism — “tense discussions” – masked a de facto mutiny against the US sherpas on both climate change and trade, bitterly fighting to the last minute a US clause on Washington “helping” countries access clean fossil fuels.

World
US Doubles Down on Disagreement With G20 Climate Change, Trade Agenda
In the end we got the proverbial muddle through. Here’s the paragraph in the final communiqué that singles out the Trump administration’s decision to abandon the Paris agreement:

“We take note of the decision of the United States of America to withdraw from the Paris Agreement. The United States of America announced it will immediately cease the implementation of its current nationally-determined contribution and affirms its strong commitment to an approach that lowers emissions while supporting economic growth and improving energy security needs. The United States of America states it will endeavor to work closely with other countries to help them access and use fossil fuels more cleanly and efficiently and help deploy renewable and other clean energy sources, given the importance of energy access and security in their nationally determined contributions.”

Directly following that paragraph is this one, concerning the G-19:

“The Leaders of the other G20 members state that the Paris Agreement is irreversible. We reiterate the importance of fulfilling the UNFCCC commitment by developed countries in providing means of implementation including financial resources to assist developing countries with respect to both mitigation and adaptation actions in line with Paris outcomes and note the OECD’s report “Investing in Climate, Investing in Growth”. We reaffirm our strong commitment to the Paris Agreement, moving swiftly towards its full implementation in accordance with the principle of common but differentiated responsibilities and respective capabilities, in the light of different national circumstances and, to this end, we agree to the G20 Hamburg Climate and Energy Action Plan for Growth as set out in the Annex.”

In Hamburg, the Trump Organization was all over the place. First Daughter Ivanka even took Daddy’s chair at the forum for fleeting moments while he was away on bilaterals. Yet she did perform on substance, unveiling a $300 million program at the World Bank providing loans, mentoring and access to the financial markets for women-led start-ups in the developing world. Both the White House and the World Bank credited Ivanka for the idea.

Away from hellish issues, under a sunnier perspective, wind and solar power are set to become the cheapest form of power generation across the G20 by 2030. Already in 2017, over a third of German electricity has come from wind, solar, biomass and hydro, at 35% (in the US is only 15%). So Germany is not green, yet – but it’s getting there fast.

In Hamburg, Merkel collected a win on climate change; a relative win on trade (with the US self-excluded); but a miserable loss on mass migration. No NATO power at the G-20 would have had the balls to publicly connect the dots between ghastly US/NATO wars in Afghanistan, Libya, the Syrian proxy war generating millions of refugees for whom the only hope is Europe.

Geopolitically, Washington is de facto cutting off Germany while England has zero power left. The Trump administration considers both Germany and Japan as enemies who are destroying US industry through currency rigging. In the medium term, it’s fair to expect Germany to slowly but surely re-approach Russia. As much as Washington’s unipolar moment may be fading fast, the Game of Thrones in the G-20 realm is just beginning.