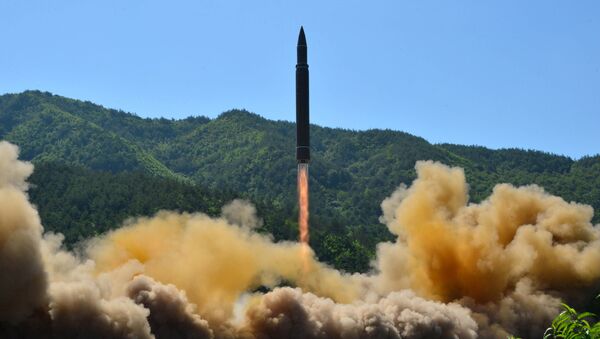 © REUTERS / KCNA
Subscribe
The People’s Democratic Republic of Korea (DPRK) has warned of imminent nuclear war following a US live-fire bombing run near its border on Friday, speedily implemented as a response to Pyongyang’s July 4 demonstration of what Washington believes to be its ability to strike the US mainland with an ICBM.

In a Sunday editorial in the state-run Rodong Sinmun newspaper, the DPRK accused Washington of engaging in "military provocations" designed to initiate nuclear conflict in the region.

"[Washington] is surely spreading into a new world war," the Rodong Sinmun editorial asserted, adding that American military moves in the region were merely an attempt to distract from US President Donald Trump's "serious crisis of power" on Capitol Hill.

Following Pyongyang's launch of what it claimed to be its first ICBM, the United Nations Security Council held an emergency meeting and the US deployed two B-18 strategic bombers to the region, carrying out live-fire bombing runs at a South Korean training range on Friday.

The B-18 bombing runs were escorted by US, South Korean and Japanese fighter jets.

The Pentagon, through its Pacific Command, tweeted that the runs "demonstrated America's ironclad commitment to the defense of our allies," according to RT.

Moscow has provided proof to the United Nations that the missile Pyongyang launched on Tuesday was a mid-range, and not an intercontinental ballistic missile.

Although Pyongyang has recently declared its intention to continue underground nuclear weapon test detonations, US intelligence agencies, monitoring satellite imagery of DPRK nuclear weapons testing facilities, said Sunday that between June 28 and July 5, "No significant new activity can be observed," cited by Yonhap.