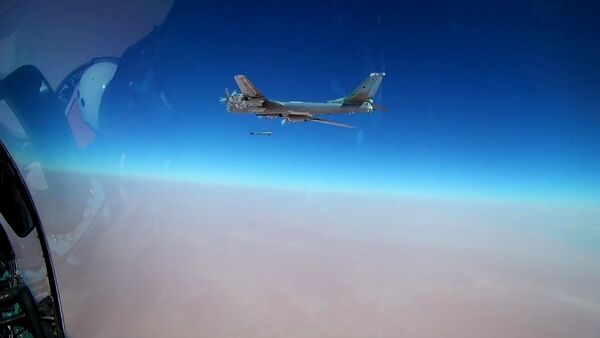 On Thursday, President Putin praised the performance of Russia's advanced Kh-101 cruise missiles, which have been used in Syria, saying they "showed a high degree of reliability." Russian military experts explained what makes these types of Russian missiles such a powerful force.

On Wednesday, the Russian Defense Ministry reported that Russia's Tu-95MS (Bear-F) long-range bombers had struck Daesh targets in Syria with brand-new Kh-101 cruise missiles, destroying three large terrorist arms and ammunition depots, as well as a terrorist command center near the city of Uqayribat on the border between Hama and Homs provinces.

The strikes were made from a range of about 1,000 kilometers and marked the sixth time that Russia has used the Kh-101 in combat, the Ministry said.

"Regarding the use of our weapons, including in the fight against terrorists in the Syrian Arab Republic, I would like to thank both the military and the designers of our state-of-the-art Kh-101 missile systems. This missile showed a very high degree of reliability," Putin said at a meeting of the commission for military-technical cooperation (MTC).

He praised Russian weapons used against terrorists in Syria.

'High Reliability': Putin Praises Performance of Kh-101 Cruise Missiles in Syria
"I will note that Russian weapons demonstrate reliability and great capabilities during the anti-terrorist operation in Syria," Putin said.

He added that when exporting armaments, Russia is taking into account the international situation in order to prevent the intensification of any conflicts.

In its comment on the issue, Russia's online newspaper Vzglyad noted that the infrastructure of terrorists in Syria is not the only possible target for the weaponry of this class and it was not developed for the fight against Daesh. Airfields, air-raid shelters, command centers, military bases, missile launchers, oil storage facilities, and other infrastructure objects which are worth millions and billions of US dollars and which are located deep inside an enemy's territory, could be easily destroyed with one such missile, worth a couple million rubles and within a couple of hours.

It is not surprising that such weaponry provides serious military advantages. Its use in Syria may be regarded as a range field test, very important from the military-engineering point. However, as terrorists don't possess advanced missile defense systems, they can't be fully called combat tests.

Lieutenant-General Aitech Bizhev, former Deputy Commander of the Air Force for the CIS, commented on the state-of-the-art missile, saying that it was developed to replace the Kh-55 (NATO reporting name AS-15 'Kent'), a Soviet/Russian subsonic air-launched cruise missile, designed by MKB Raduga.

"It is a more precision-guided missile with an advanced range of up to 4,500 kilometers in real combat conditions," he said.

It was manufactured using modern technology to reduce radar visibility and is equipped with a system of terrain avoidance.

In its analysis of the missile, online journal Strategic Culture Foundation earlier noted that the new cruise missile "is believed to be able to correct its flight trajectory. It boasts a low radar signature. In particular, an opto-electronic flight correction system is used instead of a radio altimeter. The weapon with radar-evading stealth features poses unique threats because it can defeat defenses by flying at low altitudes, avoiding radars, and hiding behind terrain."

Lieutenant-General Aitech Bizhev confirmed to Vzglyad that low radar visibility and the system of terrain avoidance enable the missile to avoid air defense systems and hit the target.

Military expert Anton Lavrov told the outlet that the Kh-101 uses GLONASS, the Russian satellite navigation system, for trajectory correction, which enables it to plan a more complicated route including flights over featureless terrains. The missile is reported to have an accuracy of five to six meters.

Why Striking Daesh With New Kh-101 Missiles Was Both 'Right and Justified'
Andrei Frolov, an expert at the Center of Analysis of Strategies and Technologies said that in comparison with the earlier modifications, this missile has a longer range, has lower observance, and is more precise and more protected against jamming.

"A range of 4,500 kilometers is a serious characteristic of an air launched missile. Not many countries have such weaponry in their possession," the expert said.

'Two Tasks' Russia Accomplished by Striking Daesh With New Kh-101 Missiles
According to the analysis of the Strategic Culture Foundation, the new missiles afford Russia’s bomber fleet a long-range precision strike capability that was until recently the sole purview of the US Air Force.

Aitech Bizhev noted that the Kh-101 is an analogue of the US cruise missile. However in terms of its precision and navigation system Russian missiles are advantageous.

This view is echoed by Andrei Frolov, who also noted that Russian missiles are advantageous over Boeing AGM86, which are integrated with Boeing B-52 strategic bombers. The US missiles have the range up to 2,500 kilometers. The expert said that the US prefers launching Tomahawk cruise missiles from its battle ships.

Anton Lavrov explained that Tomahawks have a wider set of flight plans, but lower speed, precision and range. The range of AGM-109H/K (the modification of Tomahawk), for example, is up to 2,500 kilometers.

He noted that the US has in possession a new modification of a missile with stealth features, but it is not strategic and its range is less than 1,000 kilometers.

"The Kh-101 and the Kh-102 missiles increase opportunities of both non-nuclear and nuclear strikes," Andrei Frolov concluded.