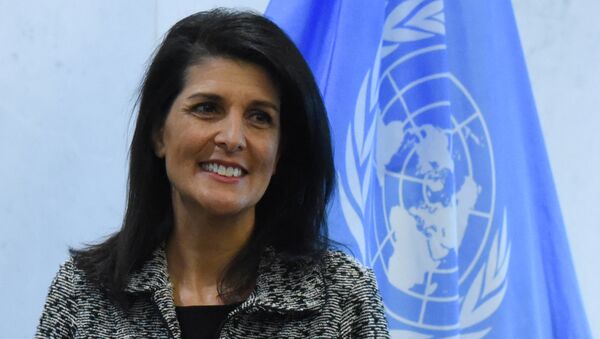 © REUTERS / Stephanie Keith
Subscribe
International
India
Africa
"Everybody knows that Russia meddled in our elections," US Ambassador to the UN Nikki Haley said in an interview clip aired Saturday.

Speaking to CNN's State of the Union, Haley said that US President Donald Trump brought up alleged election meddling in his meeting with Russian President Vladimir Putin at the G20 summit in Hamburg, Germany, Friday, to let Putin know that "yes, we know you did it, and cut it out."

Russia has consistently denied all allegations that there was any state sponsored interference in the US's presidential election last year, a suspicion still the subject of many official investigations, few of which have turned up much public, concrete evidence. Trump has so far refused to clearly point the finger at Russia, though in Haley's telling, that's what happened in his meeting with the Russian president.

"And it's not just going to be us saying this. I think you're going to hear other leaders come out and say, cut it out, we're not going to put up with it," she stated.

When now-French President Emmanuel Macron's campaign was hacked on the eve of the election, eyes turned immediately to Russia — only for the head of France's cyber security agency to later say they'd found no trace of Russian involvement.

Haley made the same assertion in comments to CBS on Saturday, and went on to say that Russia needs to understands that there will be "consequences" for their alleged meddling.

"Not just Russia," she said in response to a question about what those consequences might be. "Any country needs to know that there are consequences when they get involved in our elections…. The one thing we don't want is for our political process to ever be influenced or tainted in any way. And I think that we have to make sure that we're always strong on that point and let everyone know that we're not going to put up with it."

World
The Putin-Trump Meeting: A Ray of Hope for 'Concrete Solutions' on Syria

The US has so far said "cut it out" to Putin several times, apparently, expelled 35 Russian diplomats and slapped new sanctions on Russian businesses and individuals. As to what further consequences there may be, Haley said, "you're going to have to ask the President."

Reports about any actual exchange about Russia's alleged hacking during the meeting of the two leaders are conflicting.

Russian Foreign Minister Sergei Lavrov told Russian reporters after the meeting, "The US president said that he heard clear statements from President Putin about this being untrue and that he accepted these statements." US Secretary of State Rex Tillerson, on the other hand, said Trump pressed Putin on the issue more than once, and when Putin of course denied the allegations, the US president decided it was time to move on.