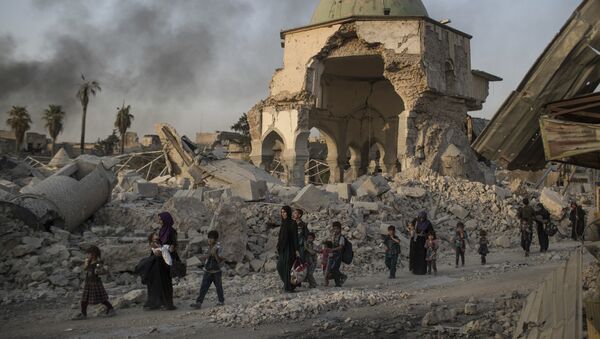 © AP Photo / Felipe Dana
Subscribe
Iraqi security forces on Saturday killed 35 Daesh militants and arrested six others while they were trying to flee their last redoubt in the Old City on the western side of Mosul, the Iraqi military said.

The militants were killed while they were trying to infiltrate from the western side, across Tigris River that bisects Mosul, to the liberated eastern side, the Joint Operations Command (JOC) said in a statement.

Meanwhile, JOC spokesman Brig. Gen. Yahya Rasul told reporters that the Iraqi forces are in full control of the Old City, despite sporadic clashes in some pockets in parts of neighborhoods stretching on the bank of the Tigris River.

"Our forces are continuing their advance to free the last parts of the Old City," Rasoul said.

The fighting in the Old City is becoming heavier as Iraqi forces push the extremist Daesh militants in the strip of land along the bank of the Tigris River. The desperate militants have been increasingly resorting to suicide attacks and showing stiff resistance that slowed the troops' progress in the recent days.

And there were a large number of roadside bombs and booby-trapped buildings, in addition to Daesh snipers taking positions in the buildings and narrow alleys of heavily-populated neighborhoods, where thousands of civilians still live under Daesh rule.

Mosul, 400 km north of Iraq's capital Baghdad, came under the militant group's control in June 2014, when government forces abandoned their weapons and fled, enabling Daesh to take control of parts of Iraq's northern and western regions.