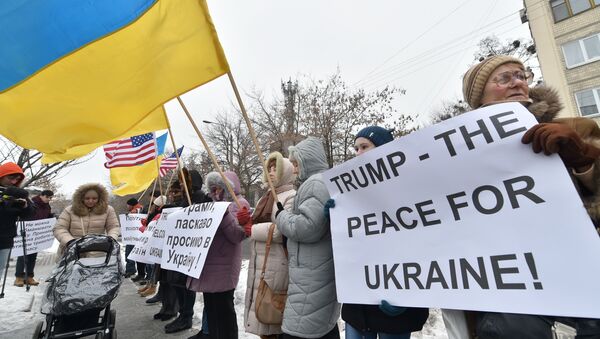 © AFP 2023 / Sergei SUPINSKY
Subscribe
International
India
Africa
The United States should use its influence in Ukraine to convince the country's parliament to transform the country into a federation, accoring to Jaromir Kohlicek, a member of the European Parliament's Delegation to the EU-Ukraine Parliamentary Association Committee.

Second Explosion Occurs in Downtown Lugansk in Eastern Ukraine
MOSCOW (Sputnik) — The United States should use its influence in Ukraine, including the recent appointment of the special representative, to convince the country's parliament to proceed with the reform of the Constitution to transform the country into a federation, Jaromir Kohlicek, a member of the European Parliament's Delegation to the EU-Ukraine Parliamentary Association Committee, told Sputnik on Friday.

Earlier in the day, US Secretary of State Rex Tillerson announced the appointment of Ambassador Kurt Volker, former US Permanent Representative to NATO, as US Special Representative for Ukraine Negotiations to spearhead US efforts to move forward on the implementation of the Minsk agreements.

"I am not really sure [that this appointment will speed up the process of implementation] because the most important [part] of Minsk agreement is new Ukrainian Constitution that has to change unitary state to some type of either federation or something like federation."

"Whenever the US government would like to move anything with Minsk agreement, they first have to persuade Ukrainian Verkhovna Rada that they really would like to succeed in these most important topics. That’s the most important item, I think," Kohlicek, who represents the Czech Republic in the European Parliament, said.

Kohlicek noted that he was not sure the European Union would come up with any new, complementary steps in the near future as the parliament would soon go on vacation.

Also on Friday, Russian President Vladimir Putin and his US counterpart Donald Trump held their first ever meeting, which took place on the sidelines of the G20 summit and lasted over two hours. The two leaders discussed Ukraine among other issues. Russian Foreign Minister Sergey Lavrov said, following the talks, that Moscow and Washington agreed to set up a communication channel to advance the settlement in Ukraine on the basis of Minsk agreements.

The constitutional reform, suggested after the 2015 summit in Minsk, would have the decentralization at its core, so that the peculiarities of various regions of Ukraine were appropriately addressed.

The military conflict in Ukraine broke out in 2014 after the regions of Donetsk and Luhansk refused to recognize the new Ukrainian government that came to power in what they perceived to be a coup. The ceasefire agreement was reached in Minsk in 2015, brokered by the leaders of the Normandy Four group, which included Russia, Ukraine, Germany and France, but the situation has remained tense.