Ousted Ukrainian President Confident 'Truth About Maidan' to Be Revealed 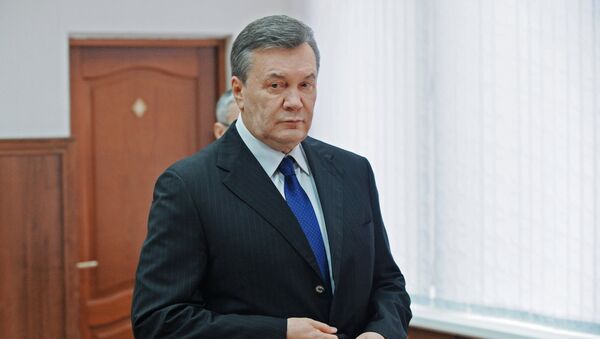 © Sputnik / Sergey Pivovarov
/
Go to the photo bank
Subscribe
Former Ukrainian President Viktor Yanukovych stated that he is confident that the truth about the events that took place in Kiev's landmark Independence Square in 2013 will eventually be revealed.

Russian Senator Reveals How to Bust the Myth of 'Russian Threat'
MOSCOW (Sputnik) – Ousted Ukrainian President Yanukovych said Wednesday that he is sure that the world will eventually find out the truth about the 2013 events, even though the current administration does not want that to happen.

"The authorities are doing everything to make sure the truth is not established. In the past years, they did everything to destroy the evidence proving that it was the foreign mercenaries and those who controlled Maidan that were behind snipers' shooting at Berkut [or eagle in English, a special police force of the Ukrainian militsiya within the Ministry of Internal Affairs] troops as well as at fighters at Maidan. It was s provocation targeted at blaming law enforcement officers and the Ukrainian government for everything bad [that had happened]," Yanukovich told reporters.

According to the former president, these current attempts have not been successful.

"Eyewitnesses, participants, victims — today many [of them] realize that shots were fired from the buildings controlled by Maidan. It means that [there were] organized groups of snipers [who aimed] to provoke clashes. This is the truth that will be established, there are many documents to prove that," Yanukovich concluded.

Yanukovich was toppled and forced to flee Ukraine as a result of the protests which sparked in Kiev's landmark Independence Square, or Maidan Nezalezhnosti, in 2013 and marked the start of the political crisis.

Following the coup, Crimea seceded from Ukraine and reunified with Russia after 96 percent of its voters supported such a move through a referendum in March 2014.

Kiev, as well as Brussels and Washington, did not recognize the decision of Crimea's residents. Russian authorities have repeatedly said that the Crimean population decided to rejoin Russia in a democratic procedure.

Ex-Ukrainian President Viktor Yanukovych said Thursday that he intended to raise the question of the legal responsibility of the leaders of France, Germany and Poland as the guarantors of the 2014 agreement on settlement between the Ukrainian opposition and the government, which was never implemented.

"We have started the process of applying to various authorities which would raise the level of responsibility of these countries and individual leaders who participated in the signing of this agreement during that period. Of course, it is their political responsibility… But as for the legal and material [sides of the issue], including because the damage was caused to the state by the passivity of these countries, the question of their liability will be determined in the near future," Yanukovych told reporters.

In 2014, the Agreement on settlement of political crisis in Ukraine has been signed by Yanukovych and opposition leaders Vitali Klitschko, Arseniy and Oleh Tyahnybok. The foreign ministers of Germany and Poland, Frank-Walter Steinmeier and Radoslaw Sikorski, as well as head of the Department for continental Europe of the Ministry of foreign Affairs of the French Republic Eric Fournier witnessed the signing of the document. Special representative of the President of the Russian Federation Vladimir Lukin decided not to put his signature under the deal. The agreement was not implemented, and the military conflict in Ukraine still continues.