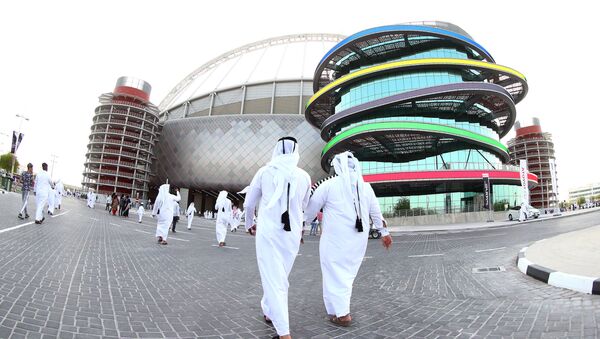 © AFP 2021 / KARIM JAAFAR
Subscribe
The diplomatic crisis in the Persian Gulf may end up spilling into the world of football as Qatar risks losing the right to host the 2022 FIFA World Cup.

Qatar, Four Arab States Falling Into Downward Sanctions Spiral
As tensions in the Persian Gulf continue to escalate, Qatar stands at risk of losing the right to host the 2022 FIFA World Cup due the blockade imposed against the country by Saudi Arabia and its allies.

Orwell Prize-winning journalist and Georgetown University professor Anatol Lieven told RIA Novosti that the shortage of construction materials caused by this blockade may deal a serious blow to Qatar's efforts to build the infrastructure necessary to host the football tournament.

"Iran and Turkey vigorously support Qatar, making sure that the country continues to receive the necessary food supplies. However, they cannot ensure the shipments of materials for the construction sector which is already experiencing problems. This may deal a serious blow (to Qatar) if it results in the relocation of the 2022 FIFA World Cup, considering how much money Qatar has already invested in this prestigious project," Liven explained.

It should be noted however that Ghanim al-Kuwari, executive director at the committee overseeing preparations for the World Cup 2022, has previously said that the diplomatic crisis and the blockade had no impact on the construction works related to the upcoming tournament.

Late in June, Saudi Arabia and its allies presented Qatar with a list of 13 demands, including the severance of Qatar's relations with Iran, the closure of Turkey's military base in Qatar and the shutting down of the Al Jazeera TV channel, as well as ending support for the Muslim Brotherhood, an organization banned in Russia.

On Tuesday, Doha said that the demands are unrealistic, but it is ready to continue dialogue to resolve the diplomatic crisis. In their turn, a joint statement issued by foreign ministers of the Saudi-led bloc said that their countries are set to keep the boycott in place until Doha changes its policies "for the better."