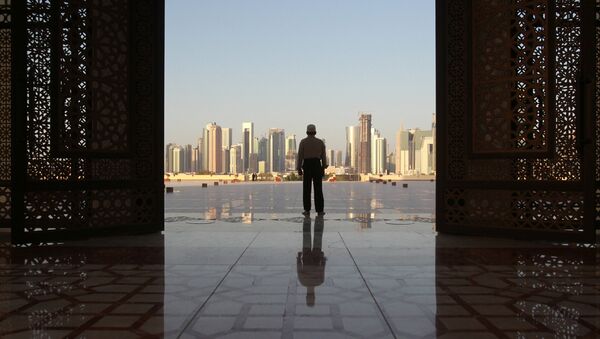 © REUTERS / Naseem Zeitoon
Subscribe
International
India
Africa
Reports say that Doha has allegedly agreed to meet the requirements of a new five-paragraph list which includes, among other things, the expulsion of a former Muslim Brotherhood preacher and the suspension of information attacks against the Gulf States and Egypt by Al-Jazeera.

'Assad Mustn't Go': How Qatar, France, Germany 'Wised Up in Regard to Syria'
Recently, unofficial reports have emerged claiming that in what appears to be a change of heart Qatar allegedly has agreed to satisfy the demands of a new five-paragraph list.

The aforementioned list allegedly includes the expulsion of theologian and former Muslim Brotherhood member Yusuf al-Qaradawi; the return home of Turkish troops located in Qatar; the transparency of financial transfers from Qatar to insurgents' accounts; the provision of documentation to the organizations operating in Qatar to the US intelligence services; the softening of Al-Jazeera news channel's stance and the suspension of information attacks on the countries of the Gulf and Egypt.

Citing its diplomatic sources Kuwaiti newspaper Al-Seyassah (Policy) wrote that during the latest meeting between US Secretary of State Rex Tillerson and Qatari Foreign Minister Sheikh Mohammed bin Abdulrahman Al Thani the last paragraphs of the future agreement between the Gulf countries were discussed.

It was also reported that the United States and Kuwait would be guarantors of the implementation of the deal.

Commenting on the matter, Qatari journalist N. Musallim told Sputnik Arabic that "from the beginning of the crisis Qatar has not rejected the possibility of reconciliation."

"In the very beginning [of the crisis] the Qatari foreign minister stated that he refused to comply with the demands [of the Gulf countries' ultimatum], because they contradicted with the country's laws. However, Qatar is open for dialogue," Musallim said.

What's Behind Turkey's Decision to Shield Doha From Saudi Anti-Qatar Coalition
According to Musallim, the Qataris understand that their country is an integral part of the Arab world which can't be erased and forgotten. Everyone is interested in reaching a compromise, the journalist stressed.

For his part, Egyptian parliamentarian Mahmud Ismail suggested in an interview with Sputnik that the expulsion of Muslim Brothers from Qatar is a long overdue measure.

"In recent years Egypt has repeatedly called upon Qatari politicians [to expel the Muslim Brotherhood from the country], but each time [Cairo] was faced with a refusal. Now Qatar has consented to do this as part of conditions put forward by the countries which organized the boycott of Doha," the parliamentarian said.

Qatar Crisis: Saudi Royals Fear to Lose Hegemony in Region to Muslim Brotherhood
According to Ismail, the recent developments can be seen as a diplomatic victory for Egypt.

"Discussions and disputes among the politicians of the Persian Gulf is the result of the efforts of the Egyptian Foreign Ministry which managed to convince Arab and Western countries that Qatar assisted some terrorist organizations. [Qatar] provided [them] with financial support and information backing through the Al-Jazeera [news channel]," Ismail elaborated.

Four out of the last five requirements directly concern Egypt, the deputy said.

For example, the cessation of information attacks on Egypt, the expulsion of the Muslim Brotherhood and al-Qaradawi from Qatar.

But the most important achievement is the willingness of Qatar to seek a path to reconciliation, he emphasized.

Media expert Ahmed Abdel Fattah noted in an interview with Sputnik that "on the road to reconciliation Qatar needs to solve the problems which had led to the ongoing crisis."

"First, it is necessary to bring an aggressive media campaign against Egypt, Saudi Arabia, the UAE and Bahrain to a halt. Doha should stop giving the floor to terrorist organizations such as Ahrar ash-Sham in Syria and the Muslim Brotherhood in Egypt," Fattah emphasized.

Military Invasion Not the Only Option: How Else Saudi Arabia Might Ignite Qatar
He added that the reduction in the number of broadcasted programs by Al Jazeera will diminish the latter's influence in the Arab world and inevitably deal a blow to Qatar's activities.

"Al Jazeera is an integral part of Qatar's influence," Fattah said, "If Qatar loses this weapon then much will change in the region. Even the residents of Arab countries, who have been poisoned by Al-Jazeera's ideas, will change."

On June 5, Bahrain, Saudi Arabia, the United Arab Emirates (UAE), and Egypt severed diplomatic ties with Qatar. The countries closed land, air and sea passage to all vessels and vehicles coming from or going to Qatar.

The Gulf monarchies also handed a 13-point ultimatum to Qatar, demanding, among other things, the severance of ties with Iran and that Doha-based news organization Al Jazeera is shut down.

After Qatar refused to satisfy the demands, Riyadh signaled Wednesday that the Saudi-led anti-Qatar coalition will keep the boycott in place until Doha changes its policies "for the better."