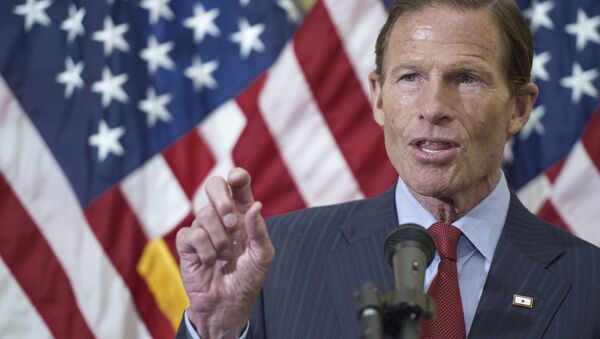 Talks with North Korea should be made conditional upon ensuring that Pyongyang eliminated its nuclear program, according to US Senator Richard Blumenthal.

US to Share Intel on North Korea With Russia, But Keeps Its Plans Secret
WASHINGTON (Sputnik) — Talks with North Korea should be made conditional upon ensuring that Pyongyang eliminated its nuclear program, US Senator Richard Blumenthal said in a press release.

"Any talks with North Korea must be conditioned on verifying through the IAEA [International Atomic Energy Agency] that their nuclear weapons program is suspended," the release stated on Wednesday.

On Tuesday, North Korea announced it successfully launched its first intercontinental ballistic missile. Pyongyang claimed the missile reached an altitude of 1,740 miles during its 39-minute flight before accurately hitting an intended area in the Sea of Japan.

Blumenthal said the risk to the United Stated posed by North Korea demands a comprehensive strategy that should be presented by Trump's cabinet as soon as possible.

Sanctions can be a powerful tool if they are tightened and applied to affect the country’s energy and fuel sectors as well as military products, Blumenthal added.