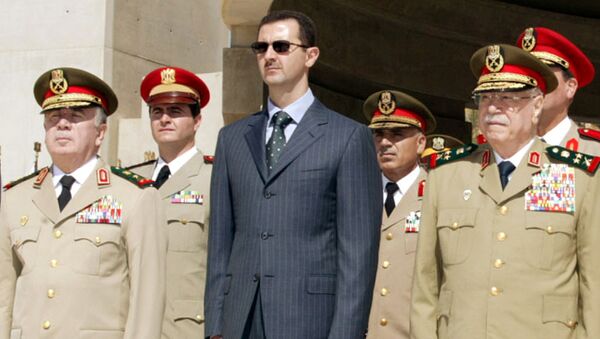 Ekaterina Blinova
All materialsWrite to the author
The Trump administration's inconsistent foreign policy in the Middle East is likely to prompt Washington's European allies to side, at least on critical occasions, with Russia, geopolitical analyst Gilbert Mercier told Sputnik. As a result, the United States could end up isolating itself, he added.

The Qatari crisis has become a litmus test for major geopolitical players, exposing who is really interested in maintaining stability in the Middle East and who is exercising a Machiavellian approach to the region's affairs.

"The United States, which has largely, deliberately or not, instigated the crisis cannot provide a diplomatic solution, therefore Russia, China and the EU will have to step in and play a decisive role in the matter to diffuse it," Gilbert Mercier, author of "The Orwellian Empire", editor-in-chief of News Junkie Post, and geopolitical analyst, told Sputnik.

Gulf Crisis: Who Will Blink First?
On June 5, Bahrain, Saudi Arabia, the United Arab Emirates (UAE), and Egypt severed diplomatic ties with Qatar in what appeared to be a coordinated move. The countries closed land, air and sea passage to all vessels and vehicles coming from or going to Qatar.

The Gulf monarchies also handed a 13-point ultimatum to Qatar, demanding, among other things, the severance of ties with Iran and  that Doha-based news organization Al Jazeera be shut down.

After Qatar refused to satisfy the demands, Saudi Foreign Minister Adel al-Jubeir announced July 5 that the Saudi-led anti-Qatar coalition is set to keep the boycott in place until Doha changes its policies "for the better."

It appeared that the conflict came from completely out of the blue, however, according to Mercier, "crises like the one brewing between Saudi Arabia and Qatar do not materialize out of nowhere."

"The rift between Saudi Arabia and Qatar is due to many factors including religious ideology, the struggle for regional influence and share of the energy market," he noted.

What's Behind Turkey's Decision to Shield Doha From Saudi Anti-Qatar Coalition
According to Mercier, the relationships in the Gulf have been problematic since Iraq's invasion of Kuwait in 1991. However, tensions between the Kingdom of Saudi Arabia and Qatar reached an apex during the Arab Spring, when Doha backed the rise of the Muslim Brotherhood, outlawed in Saudi Arabia.

The ongoing crisis, "if not quickly resolved, could be a fatal blow to the Gulf Cooperation Council (GCC)," the geopolitical analyst warned.

"Not only the GCC is moribund in the aftermath of the Saudi-Qatari rift, it is even dragging African countries along. It could, by design or not, create a deadly wedge between predominantly Sunni Muslim countries. Many countries, willingly or by some form of coercion, have joined the Saudi lead coalition by either severing ties with Qatar like Bahrain, Comoros, Egypt, the UAE, the Maldives, Mauritania, Libya (at least the so-called House of Representatives in Tobruk), and Yemen (the government of President Hadi, who is backed by the Saudis in Yemen's bloody civil war). Others have more cautiously downgraded their relations with Doha, such as: Chad, Djibouti, Jordan and Niger," Mercier pointed out.

On the other hand, Turkey and Iran immediately stepped in to support isolated Doha.

As a result, the two blocs have emerged, further aggravating tensions in the region. 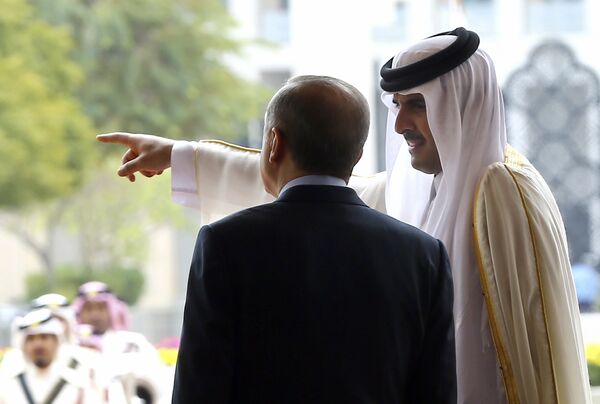 "Several nations have so far offered to mediate the crisis: France, Iran, Kuwait, Morocco, Pakistan, Turkey and the US," the analyst continued.

"In regard to the US, at least for now, they have done nothing to appease the tensions," he emphasized, "As I mentioned recently on the Sputnik show TrendStorm, during the Obama administration there was a dichotomy between US foreign policy actions and discourse, while during the Trump administration the cacophony between the White House, the State Department and the Pentagon might be laughable but is truly alarming."

Indeed, it raises questions as to why just a few days after accusing Doha of funding terrorism, the Trump administration signed a $12 billion deal to sell Qatar three dozen F-15 fighter jets.

"It is very hard to see a coherent plan in the United States, unless the plan is to further the controlled demolition of the Middle East for the immediate benefit of the military-industrial- complex, which has gained even more influence over US affairs during the Trump administration," Mercier elaborated.

Saudi Arabia Vows to Keep Boycott in Place 'Until Qatar Changes Policies'
According to the analyst, Washington has obviously played an important role in the Saudi-led coalition's effort to isolate Qatar.

"When you look at the timeline, it is rather obvious that Washington gave the green light to the palace coup of Crown Prince Mohammed bin-Salman, likely with Israel's approval," he said, referring to the sudden decision by King Salman to name his son the heir to the throne.

"Look at it this way, the embargo and the soft coup all happened in the aftermath of Trump's visit to first Riyadh then Tel-Aviv," Mercier highlighted.

Meanwhile, some observers assume that Qatar's cooperation with Iran could have been one of the reasons behind Riyadh's crackdown on Doha. Furthermore, Doha has seemingly softened its stance toward President Bashar al-Assad.

"Qatar, despite its initial support for the al-Nusra Front, has finally wised up in regard to Syria, and now the unprovoked hostility of Saudi Arabia will only bring Doha closer, not only to Tehran and Ankara because of their active support in the crisis, but also to Moscow, which will likely see its Middle East influence increase," Mercier told Sputnik. 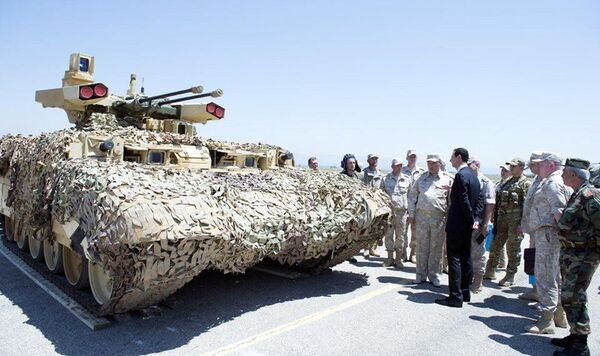 Syria's President Bashar al-Assad visits a Russian air base at Hmeymim, in western Syria in this handout picture posted on SANA on June 27, 2017, Syria.
© REUTERS / SANA

According to the geopolitical analyst, it is Russia which "can definitely help resolve the crisis, and avoid an outright war between the two blocks."

What is more interesting, it turned out that the major European powers do not share America's stance on the Syrian and Qatari crises.

Newly-elected French President Macron has stated recently that Assad's ouster is not a precondition for the resolution of the Syrian crisis. Likewise, German Foreign Minister Sigmar Gabriel said that the future of Assad and his government can only be resolved through negotiation.

These statements came amid a new wave of accusations against the Syrian President on the part of Washington.

"It is refreshing to see European leaders not drinking as much of Washington's Kool-Aid as before! There is also on the part of France and Germany an effort to establish a detente with Russia," Mercier underscored, commenting on the issue.

"Both Angela Merkel and Macron understand the erratic nature of the Trump administration. On the issue of Syria and the crisis in the Gulf, it seems that there is a newly found convergence between Paris and Berlin. German Foreign Minister Sigmar Gabriel concurred with Macron on the Assad issue, and he was recently shuttling between the Gulf states to offer some mediation in the Saudi-Qatari crisis," the geopolitical analyst noted.

"Ultimately, by trying to isolate Qatar in this instance, like the US has been trying to do with Russia with the economic sanctions over Ukraine, the United States could end up isolating itself, providing that the European Union grabs  this opportunity to wise up, and side, at least on critical occasions, with Russia," Mercier stressed.