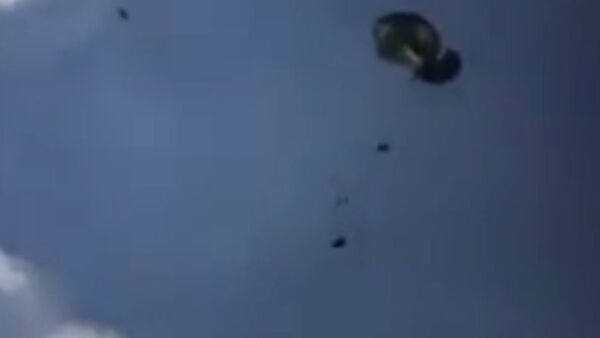 A US Army sergeant has been charged for his involvement in the remarkable destruction of three combat vehicles that plunged to Earth last year during a parachute drop in Germany, a service spokesperson said on Tuesday.

Maj. Juan Martinez, spokesman for the 173rd Airborne Brigade, said that Sgt. John Skipper of the 1st Battalion, 91st Cavalry Regiment was charged in May with destruction of government property and falsifying an official statement.

There is also a pending recommendation on whether to move with forward with a court martial following an Article 32 probable cause hearing. Stars and Stripes quoted Martinez saying in a statement,"Should this case progress, we will continue to release information consistent with Army policy."

The charges seem to indicate a feeling amongst officials that an equipment malfunction is not to blame for the parachute harnesses detaching from the vehicles.

"There were multiple rehearsals and inspections of the equipment prior to mission execution," Martinez wrote in an email to the Army Times during the investigation.

A video captured the incident, which took place on April 11, 2016 during the Saber Junction training exercise at Germany’s Hohenfels training area. The three Humvees, which can cost up to $220,000 each, slipped from their parachute harnesses while being dropped from C-130 Hercules transport aircraft along with weapons, communications equipment and 150 supply bundles.

​At the time of the incident Martinez said the video, "does not overshadow the hard work of the paratroopers, allies, and partners that took place during Saber Junction 16."

The video has been viewed more than million times on YouTube, and soldiers can be heard in the background laughing and cheering as the Humvees plummet to the ground.

Running from March 31 to April 24, Saber Junction 16 featured about 5,0000 troops from 16 allied partner nations from Europe. According to the US Army Europe the exercise is designed to "assess the readiness of the US Army's Stryker-based 2nd Cavalry Regiment to conduct unified land operations, with a particular emphasis on rehearsing the transition from garrison to combat operations, and exercising operational and tactical decision-making and skills."