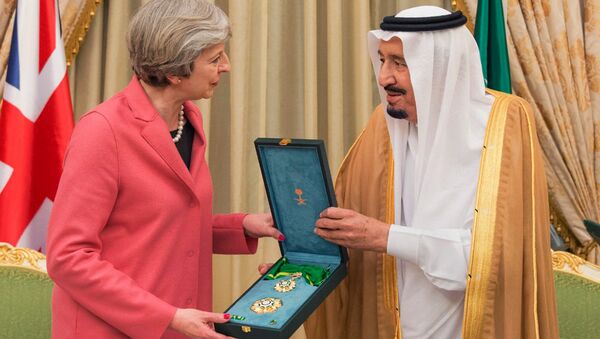 © AP Photo / Saudi Press Agency
Subscribe
A new report by the Henry Jackson Society claims Saudi Arabia has been sponsoring Islamist extremists in Britain. The findings come as British Prime Minister Theresa May faces pressure to publish the government's own report into foreign funding of terrorism.

The irony of the report is that Saudi Arabia and several of its allies in the Middle East has recently imposed a blockade of Qatar, accusing it of sponsoring terrorism.

Read our new report into foreign funding of extremism in the UK here: https://t.co/IO5n3HcOs1

​But the Henry Jackson Society, a London-based think tank, said it was Saudi Arabia in fact who were spending money exporting the ideology of Wahhabi Islam to the West.

It said Saudi Arabia has been sponsoring extremist Islamist ideology since the 1960s.

The report says the Saudis, and their oil wealth, has been used to pay for "extremist preachers and the distribution of extremist literature."

Mrs. May has been coming under intense pressure to publish the government's own report into foreign funding of terrorism.

It was completed six months ago and is reportedly sitting on her desk in Downing Street. Critics say she has put off publishing it for fear of offending Saudi Arabia.

A group of MPs have also decided against publishing a separate Foreign Office strategy paper on the region for fear of upsetting strategic relations in the Gulf, which include billions of dollars in arms, aerospace and oil industry sales.

But the opposition has seized on the government's squeamishness, which comes only weeks after Islamist extremists carried out murderous attacks in Manchester and London.

Labour leader Jeremy Corbyn has promised to ban arms sales to countries guilty of war crimes, as Saudi Arabia is suspected of committing during its war against Houthi rebels in Yemen.

In 2016, Oxfam accused the British government of violating the International Arms Trade Treaty by selling arms to Saudi Arabia.

Labour MP Dan Jarvis, a former British Army officer, said the report by the Henry Jackson Society was "very worrying" and called on the government to release their own report.

"In the wake of the terrible and tragic terrorist attacks we have seen this year, it is vital that we use every tool at our disposal to protect our communities," he said.

"This includes identifying the networks that promote and support extremism and shutting down the financial networks that fund it," he added.

The Henry Jackson Society's report said funding in the UK has taken the form of endowments to mosques and Islamic educational institutions, which played host to Islamist extremist preachers and the distribution of extremist literature.

It says two organizations, the World Assembly of Muslim Youth (WAMY) and the Muslim World League (MWL), were at the forefront of the pushing of an "illiberal, bigoted, Wahhabi ideology."

"There is a huge element of hypocrisy about the propagation of Wahhabism in Britain, as hardline Muslim regimes are utterly intolerant of any other faith," said the report.

"It is impossible to build a Christian church in Saudi Arabia, yet the same ideologues constantly demand the right to build mosques in Britain. They want the privileges here that they refuse to accord other faiths when they are in control," it added.

The Saudi Arabian embassy in London said the claims in the report were "categorically false."

After a suicide bomber blew himself up at an Ariana Grande concert in Manchester in May, killing 23 people, the embassy of the Kingdom of Saudi Arabia condemned and denounced the attack.

"The Kingdom expresses solidarity towards the United Kingdom, stressing the need for a concerted International effort to eliminate the scourge of terrorism and extremism," it added.