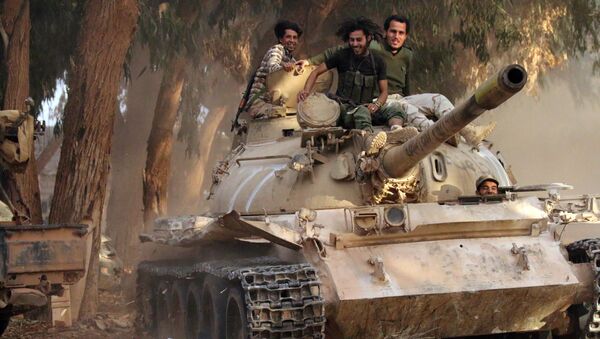 © AFP 2021 / Abdullah DOMA
Subscribe
Field marshal Khalifa Haftar, the leader of the Libyan National Army (LNA), has declared victory over his rivals in Benghazi during the nation's multifaceted civil war. Benghazi, Libya's second largest city, has been contested for three years by various factions vying for control of the beleaguered North African nation.

Appearing on television in a white military uniform, Haftar declared his faction's victory. "Your armed forces declare to you the liberation of Benghazi from terrorism, a full liberation and a victory of dignity against terrorism," he said.

Only land mines and bombs are left to be cleared, according to Haftar. Islamist militias and other rivals have been totally mopped up. Haftar added that the LNA "congratulates the Libyan people and thanks all the backing forces and neighboring who supported us."

The Battle for Benghazi has raged for three years, primarily between two factions: the LNA and the Shura Council of Benghazi Revolutionaries, an Islamist group that has close ties to Daesh. Other factions have joined the battle, which has claimed at least 700 lives- and likely far more than that. Celebratory gunshots and fireworks were reported in the embattled city upon Haftar's announcement.

Libya has been embroiled in civil war since the 2011 fall of dictator Muammar Gaddafi. The LNA now controls the majority of the country, but other factions control other sections of the country- including parts of the capital city, Tripoli.