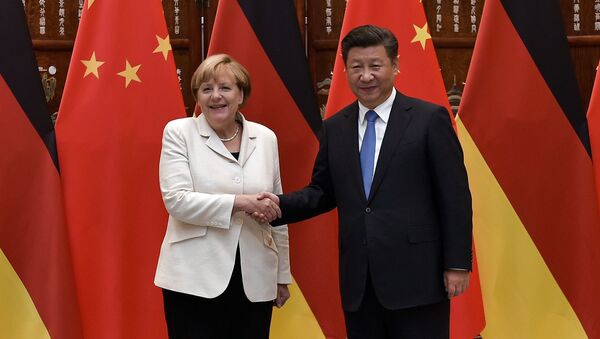 BERLIN (Sputnik) — In early June, Merkel said that Germany supported the early conclusion of an investment agreement between Europe and China.

"We intend to conclude an investment agreement soon, which could also lead to a free trade agreement with China," Merkel said at a press conference with Chinese President Xi Jinping, who is on an official visit to Berlin.

Merkel also said Germany aspired to equal relations with China in trade and stood for the mutual opening of markets.

Germany China's Most Important Partner Within EU – Chinese Premier
"For my part, I indicated that we, of course, want the relations to be always on an equal footing, and we would mutually provide access to the markets, it is very important for our enterprises," Merkel said.

The European Union has been China's largest trade and economic partner for many years, and China is the bloc's second largest trading partner. In late May, China's Deputy Minister of Commerce Li Chenggang said the volume of EU-China trade amounted to $547 billion in 2016. In addition, the European Union is the main technology supplier for China, and the third largest source of foreign investment.