Jumping Ship: Could Czech Republic Be Poised for EU Exit? 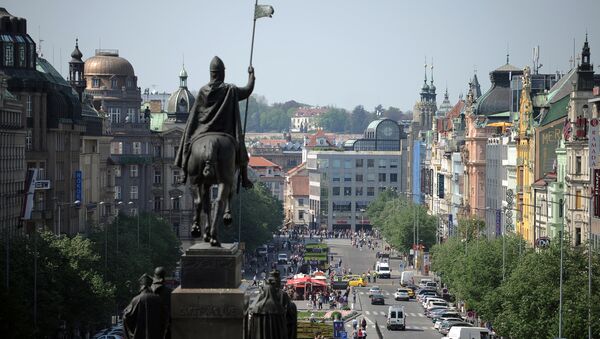 © Sputnik / Ramil Sitdikov
/
Go to the photo bank
Subscribe
Czech Foreign Minister Lubomir Zaoralek dismissed the idea of a nationwide referendum on the country’s exit from the EU as “stupid and irresponsible” and fraught with unpredictable consequences for the Czech Republic. Meanwhile, President Milos Zeman and ex-President Vaclav Klaus favor the idea of a plebiscite.

New Political Movement Calls for Czech Republic's Withdrawal From NATO, EU
In an interview with Sputnik, Premysl Votava, a leading member of the NS-LEV21 party, said that he agreed with Mr. Klaus because the European Union is sort of a “prison for Europeans”  constraining the sovereignty of its members and reserving for itself the right to decide on key issues.

“Lubomir Zaoralek argued that among other things, Brexit has curbed investment, triggered inflation and led to a drop of real-term revenues. We don’t know if our possible exit from the EU will lead to an economic collapse or will make our economy stronger. What we do know is that the Czech Republic is becoming a donor to the EU budget,” Premysl Vltava told Sputnik Czech.

He added that no matter how much the Czech Republic needs the money it is getting from Brussels, EU financing could trickle down as the funds would be diverted to the countries now knocking on the EU door.

“They are talking about taking in Ukraine. Would it be a catastrophe for the Czech Republic? I don’t think so. Foreign companies working here will not go anywhere because our labor is cheap and this is what German, French and Italian firms are looking for,” Vltava noted.

“What Brussels is telling us is undermining our status as a sovereign nation. The Czech Republic should avoid a situation they now have in Belgium, Holland, France or Britain where Islamic terrorists are terrorizing people,” Premysl Vltava said.

He blamed the US for setting off the wave of migrants with its bombings of Libya and the ouster of Muammar Gaddafi.

“We have the same situation also in Iraq, Afghanistan and Syria after what the EU, NATO or the US did there, and Europe is now paying a price for those interventions. What Brussels wants to do is an attack on our sovereignty. Imposing sanctions for our failure to implement [migrant] quotas simply makes no sense. Small wonder that people want to leave the EU,” Premysl Votava added.

Czech Republic Should Not Accept Refugees Under EU Quotas - Interior Minister
In June, the EU Commission launched legal proceedings against the Czech Republic, Hungary and Poland for non-compliance with the EU's refugee quotas.

The plan was passed by the majority of EU interior ministers, but Hungary, Slovakia, Romania and the Czech Republic voted against the measure.