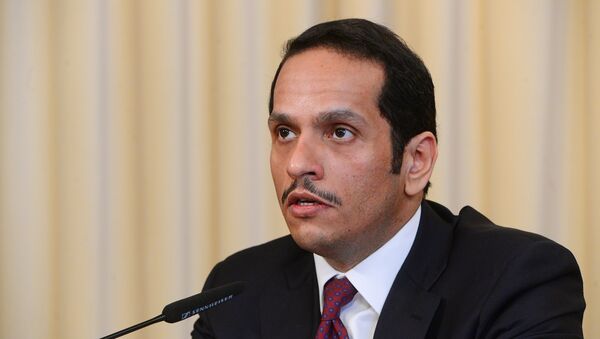 Qatar’s Foreign Minister Mohammed bin Abdulrahman Thani has arrived in Kuwait to issue Doha's response to the demands of the four Arab states that have severed diplomatic ties with it, Arab media reported Monday.

MOSCOW (Sputnik) — Saudi Arabia, the United Arab Emirates, Bahrain and Egypt agreed to a two-day extension earlier on Monday of the deadline given to Qatar to respond to their list of demands. The extension of the deadline that expired on Sunday was issued at the request of Kuwait, a mediating party between Qatar and the Gulf States.

"Qatar's minister of foreign affairs arrived in Kuwait to convey his country's response to the demands of the states that are engaged in the blockade," Al Jazeera reported on its Twitter account.

The four states' 13-point demands include the severance of Qatar’s relations with Iran, closure of Turkey’s military base in Qatar and a shutdown of the Al Jazeera TV channel.

Last week, Kuwait, which is serving as a mediator between Qatar and the Gulf States, handed the demands of Saudi Arabia, Egypt, the United Arab Emirates and Bahrain over to Doha. The requests include the severance of Qatar's relations with Iran, closure of Turkey's military base on Qatar's territory and a shutdown of the Al Jazeera TV channel. Doha was given 10 days to implement the demands, the deadline expired on Sunday.