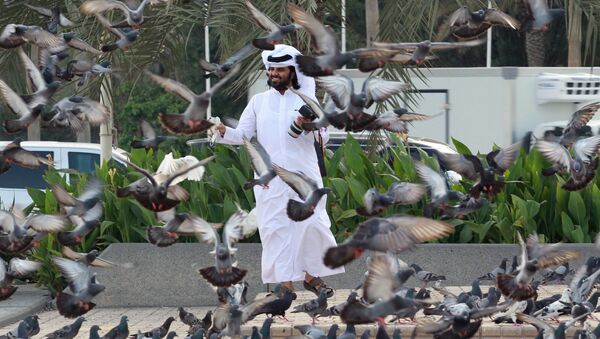 Finian Cunningham
All materials
The draconian deadline by the Saudi axis on Qatar failed to force surrender. Saudi Arabia and other Arab countries have now extended the deadline till later this week. In a battle of nerves, the Saudi rulers blinked first.

This is partly because the Saudi-led coalition of Bahrain, United Arab Emirates (UAE) and Egypt have over-reached in their showdown with Qatar. The tiny gas-rich emirate may be a lightweight in terms of territorial size and population, but it is proving to be no push-over.

And there are sound reasons why the Qataris are defiant. Owing to its superabundant natural gas reserves and a native population of only some 300,000, Qatar is the richest country in the world on a per capita basis. The blockade mounted by the other Arab countries is not harming the emirate, especially given that it has found alternative trading sources for food, water and other goods from Turkey and Iran.

Kuwait Urges Saudi Arabia, UAE, Bahrain, Egypt to Extend Qatar Demands Deadline
Since the imposed deadline nearly two weeks ago by the Saudi group, Qatar has adamantly said it would not acquiesce to a list of severe demands. Those demands included the Al Thani rulers in Doha ceasing all diplomatic ties with Iran, expelling Turkish troops from the territory, financial reparations, and closing down the Al Jazeera news station. It was always an unrealistic ultimatum. As the Qatari rulers noted, the move was simply an audacious bid to over-ride the country’s sovereignty.

The sweeping demands also show that the original claim by Saudi Arabia and its allies of confronting Qatar over its alleged support for regional terror groups was disingenuous. It is evidently all about cowing Qatar into submission under Saudi diktat.

Having run their own oil-rich economy into dire straits from a two-year disastrous war in Yemen, the Saudi rulers are making a power-grab to seize their Qatari neighbor’s prodigious energy wealth.

However, in doing so, the Saudi axis has over-stretched. For a start, the hypocritical terror claims are fooling no-one apart from US President Donald Trump who rashly bought into the Saudi allegations against Qatar. No doubt so that he could flog massive weapons deals.

Russia and European nations have instead called for diplomatic negotiations. In other words, they are undermining the Saudi position of unilateral diktat to Qatar. As times goes on, the Saudi axis will appear increasingly untenable.

US Policy Toward Diplomatic Row Over Qatar Shows Rifts in Trump Administration
Despite Trump’s foolish endorsement for beating up on Qatar, his State Department has been recently trying to limit the damage to American interests in the Persian Gulf. With 10,000 US troops stationed in Qatar and a major air base for its military operations in Syria, Secretary of State Rex Tillerson has lately been trying to cool things down. Even Trump, after his initial flubbing foray into regional politics, has begun “working the phones” to mediate a resolution.

So, if the House of Saud and its regional partners thought they could browbeat Qatar with threats of isolation, the gambit is turning out to be a huge miscalculation. Far from being isolated, Qatar has enough international leverage and financial resources to withstand the pressure. After pushing the crisis to the brink – and failing this week with a hollow deadline – the Saudis and their allies stand to lose major political capital.

Henceforth, the Qataris will be emboldened to turn the tables on their Saudi rivals.

The Qatari-owned Al Jazeera news network based in Doha could step up its critical journalistic coverage on the deep internal problems residing in its neighbors. The channel, which began in 1996, has garnered an enormous following in the Arab region and indeed around the world. This is why Saudi Arabia and the others are hostile to Al Jazeera. By stepping up, legitimately, its news focus on social problems and political repression within Saudi Arabia, Bahrain, UAE and Egypt those regimes will become exposed to greater popular backlash on their streets.

More darkly, Qatar, with its deep pockets and financial muscle, could take on a role of covertly sponsoring dissident political groups within Saudi Arabia and other members of the Arab axis.

Saudi Arabia is particularly vulnerable to internal instability. And being closely related historically and culturally to Saudi Arabia, the Qataris will be well aware of the fissures within their bigger Arabian Peninsula neighbor which they can exploit.

After all, Saudi Arabia was something of an artificial creation under the British Empire. The House of Saud was established through a bloodbath in which the British-backed tribal leader Ibn Saud was able to form “the kingdom of Saudi Arabia” in 1932 largely by massacring rival tribes and repressing their families.

Saudi Arabia 'Simply Unable to Open a Military Front Against Qatar'
The British-orchestrated power grab was enabled by the Ibn Saud tribe and its Wahhabi fanaticism being given a free hand to conquer rivals across Arabia, from the Hejaz, Nedj, Asir and over in the oil-rich eastern province of Qatif. The latter continues to be a hotbed of dissent against the House of Saud among the mainly Shia population there. Despite lack of news coverage, the Saudi rulers are in a virtual state of civil war in Qatif, deploying artillery and helicopter gunships in a bid to restore a semblance of order.

The House of Saud, currently headed by 81-year-old King Salman, one of the many sons of the original founder, Ibn Saud, comprises some 2,000 “princes” who form the inner circle of national power. But that Saudi cabal only represents about 0.01 per cent of the country’s native population of 20 million. The power structure is therefore inherently unstable. Saudi instability has been further accentuated with the recent elevation of Salman’s son, Mohammed, to the Crown Prince position.

There are emerging reports that the former Crown Prince who was ousted in favor of the king’s son, has now been placed under house arrest by the Saudi rulers out of fear of a counter-coup.

Thus, inside and outside, the House of Saud is riven with rivalries and vendettas over a bloody and sordid past.

The knives are out for the newly appointed Crown Prince, the 31-year-old Mohammed bin Salman. He is widely seen as arrogant, reckless and undeserving of his unprecedented promotion, a promotion which has left many potential heirs to the Saudi throne out in the cold. The Crown Prince is also blamed for dragging Saudi Arabia into the ongoing Yemeni quagmire, whose burgeoning cost is ruinous and is rebounding with social discontent among young Saudis.

This Crown Prince is also seen as the main instigator of the blockade on Qatar. That blockade is turning out to be another fiasco which is infuriating ordinary Arabs across the region due to their families being torn apart and their livelihoods upended. All just because of some despotic scheme.

After weeks of outrageous intimidation, the Qataris are emerging as unbowed and confident. And if they have an inclination to seek revenge, they will find Saudi Arabia an exceedingly rewarding place.

We are not talking about Qatar arming insurgents inside Saudi Arabia or anything necessarily illicit. All that’s needed is to fan the embers of discontent within the kingdom and it will soon burst into a rage against the creaky House of Saud.