'I Totally Fell in Love With Russia': Mexican Football Fan Tells About His Trip 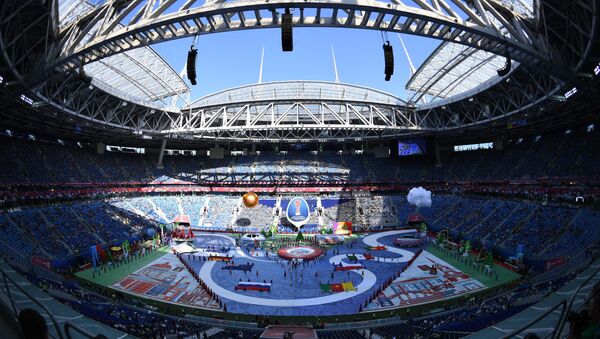 © Sputnik / Alexander Vilf
/
Go to the photo bank
Subscribe
Mexican football fan Vicente Ochoa shared his impressions about his trip to Russia, the 2017 Confederations Cup and Russian people in an interview with Championat.com.

Ochoa has been attending major sporting events since 2006. He traveled around Central and Latin America, visited Europe and Africa, and in June visited Russia.

"For some reason, this time my friends were shocked: Are you crazy, are you really going to Russia?! It's dangerous, cold, and gloomy people there will never understand you having fun," Ochoa said, citing his friends' warnings.

Chilean Football Fan Goes to Russia Looking for 'Parties, Sun, Beautiful Women'
However, in his opinion, this preconception of Russia has nothing to do with reality. During the whole time he was attending the Confederation Cup's games, nothing he was afraid might happen ever materialized.

According to him, Russian football fans turned out to be friendly people. When his team won a game in Kazan, he thought people would hate him or even start fights with him. According to Ochoa, it had always been the case in Brazil, and even in South Africa.

Thus, he was very surprised when the Russians congratulated him and took pictures with him, saying: "Hey, guys, you played well."

"I could not believe it, it was very nice. And then a family came to us — a mother, a son aged about 8 and his older sister. There was a Russian flag on the shoulders of the boy, he grabbed my arm, pulled it, took off the flag and tied it around my neck. His mom said: ‘This is a gift so that you have good memories about Russia.' I could not stand just like that. I immediately took off my Mexican flag and put it on his shoulders. Then the boy rushed to me and started crying. I myself was on the verge, even now, when I tell you, I got goosebumps… Can such people be bad? I totally fell in love with Russia and will definitely return here next year," Ochoa said.

At the same time, Ochoa confessed that he had to face certain difficulties because the local police and event volunteers had a poor command of English. He also felt a little bit frightened during his train trip from Kazan to Sochi.

"The cars were old, and air conditioners did not work. Since this was the first train trip in my life, I promised myself that I'd consider other options next time. But it was still fun. We went for a walk, drank all the beer in the train's bar, we were hanging out together, singing. I got to know a lot of cool Russian guys who did not get bored, and by the way, now we are going to St. Petersburg in super-modern conditions: in a train with two floors, Wi-Fi and a shower," Ochoa said.

Telling the Untold: Mexican Football Fan Reveals the Truth About Russia
In his opinion, Russia is totally ready to hold major sporting championships. The football fan plans to return next year to attend the 2018 FIFA World Cup.

Before the start of the competition, the Western media warned football fans about "crazy Russians" and spread fears that foreign fans risked being torn apart the moment they set foot in the country. However, many media outlets were pleasantly surprised about the organization of the event and the warm welcome foreigners received.

"Despite fears about hooligans ahead of the World Cup in 2018, [foreign] supporters have found friendly hosts and efficient organization," The Guardian wrote, adding that Russia has "delivered a friendly, organized dress rehearsal."

000000
Popular comments
Congratulations Russia for the tournament that I did not watch. I like to be from the West, I do accept my given culture but unfortunately I have learned to be prejudice against anything that it is Russian. Western media have created feelings that I have to check continuously on my person. There is a pride that it is toxic, harmful, and that leads reason and intellect to think that we are better than others and that our ways are better than yours; that our way is the best and that you’re evil, -believing that God is with me. Journalism sometimes becomes deceiving; thinking that I am always right, I tell others this as well; without knowing this pride makes me think that the other culture is wrong, incompetent, stupid, and that soccer is not manipulated by my benefits. Good luck Russia and I hope that the 2018 World Cup Event to be a success. And if Russia 2018 is not a success, I think, that we will see ‘happy campers,’ celebrations, dreams come true, and good business.
Luis Chicago
2 July 2017, 20:05 GMT2
000000
Luis Chicago, good comment mate
mwk
16 June 2018, 05:07 GMT
000000
Newsfeed
0
New firstOld first
loader
LIVE
Заголовок открываемого материала
Access to the chat has been blocked for violating the rules . You will be able to participate again through:∞. If you do not agree with the blocking, please use the feedback form
The discussion is closed. You can participate in the discussion within 24 hours after the publication of the article.
To participate in the discussion
log in or register
loader
Chats
Заголовок открываемого материала
Worldwide
InternationalEnglishEnglishMundoEspañolSpanish
Europe
DeutschlandDeutschGermanFranceFrançaisFrenchΕλλάδαΕλληνικάGreekItaliaItalianoItalianČeská republikaČeštinaCzechPolskaPolskiPolishСрбиjаСрпскиSerbianLatvijaLatviešuLatvianLietuvaLietuviųLithuanianMoldovaMoldoveneascăMoldavianБеларусьБеларускiBelarusian
Transcaucasia
ԱրմենիաՀայերենArmenianАҧсныАҧсышәалаAbkhazХуссар ИрыстонИронауОssetianსაქართველოქართულიGeorgianAzərbaycanАzərbaycancaAzerbaijani
Middle East
Sputnik عربيArabicArabicTürkiyeTürkçeTurkishSputnik ایرانPersianPersianSputnik افغانستانDariDari
Central Asia
ҚазақстанҚазақ тіліKazakhКыргызстанКыргызчаKyrgyzOʻzbekistonЎзбекчаUzbekТоҷикистонТоҷикӣTajik
East & Southeast Asia
Việt NamTiếng ViệtVietnamese日本日本語Japanese俄罗斯卫星通讯社中文（简体）Chinese (simplified)俄罗斯卫星通讯社中文（繁体）Chinese (traditional)
South America
BrasilPortuguêsPortuguese
NewsfeedBreaking
06:27 GMTEgypt Condemns Failed Coup Attempt in Sudan, Backs Transitional Government
06:26 GMTUK, US Agree to Keep Approach to Russia, China Based on 'Shared Values', Downing Street Says
06:18 GMTDanish PM Facing 'Minkgate' Probe Over COVID-19 Blanket Cull of Farmed Animals
06:10 GMTThe Bennett-Lapid Government's First 100 Days: What Promises Have They Broken?
05:52 GMTPowerful Earthquake in Australia Damages at Least 46 Buildings
05:42 GMTUK Reportedly Mulls Joining US-Mexico-Canada Trade Deal as FTA With America Stalls
05:24 GMTBrazilian Health Minister, Who Arrived at UN, Says Contracted COVID-19
04:30 GMTA Sigh That Tells It All: Golden Retriever Wants Attention
04:28 GMTLive Updates: Germany Registers 10,454 New COVID-19 Cases
04:11 GMTFlorida Gov. Orders All State Agencies to Search for Laundrie After Petito's Remains Confirmed
03:43 GMT'Nothing New on That': Bill Gates Brushes Off Question About His ‘Dinners’ With Epstein
03:33 GMTGOP Politicians Stand by US Border Patrol After Claims They 'Whipped' Refugees at Rio Grande River
03:14 GMTPele Cheers Up Fans by Posting Video of Him Riding Exercycle in Hospital
03:07 GMTAxis of Resistance Killed US, Israeli Commanders in Revenge for Soleimani's Assassination - Report
02:56 GMTPolitical Capital & GOP in His ’Grip’: Trump ’Wants Back’ in 2024, Journos Say
01:43 GMTIRGC Chief: Iran No Longer Sees US as Threat - Report
01:18 GMTChinese Covid Vaccines Reach 100 Nations, But WHO Warns Africa Still Short 470 Million Shots in 2021
01:04 GMTAwkward Moment as White House Staff Cuts Off Biden-Johnson Meeting in Mid-Sentence
00:20 GMTVideo: Military Jet Intercepts Small Aircraft Over NYC in the Middle of UN General Assembly
00:19 GMTPark Ranger ‘Implored’ Gabby Petito to Distance Herself From Toxic Relationship With Brian Laundrie