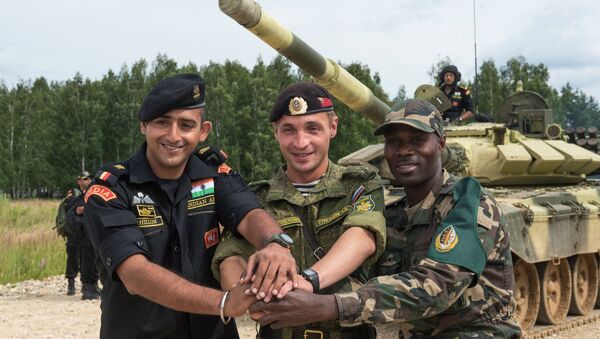 © Sputnik / Iliya Pitalev
Subscribe
With the 3rd International Army Games now less than a month away, Sputnik takes a brief look at the impressive lineup of military hardware the 27 participating countries will be showcasing during the high-profile event.

Just like it did in the summer of 2015, China will bring along its Type-96A main battle tanks to compete with Russia’s T-72B3s in the Games’ traditional tank biathlon event.

Introduced in 1997, the Type-96A tank has been gradually replacing the veteran Type-80, Type-85 and Type-88 tanks and, together with the latest Type-99, will become the mainstay of China’s armored forces in the first half of the 21st century.

We Know Our Stuff Ourselves: China to Bring Own Missiles to Army Games 2017
The main armament of the Type 96A consists of a smoothbore 125 mm gun with a Russian-designed 2A46M autoloader. The tank is powered by a liquid-cooled 1,000hp NORINCO diesel engine, which is an upgraded version of Russian tank engines. The Type-96A features arrow-shaped spaced armor modules, added to the front of the turret, and explosive reaction armor plates mounted on the front hull.

Even though the Type-96As gun is somewhat more accurate than that of Russia’s T-72B3, the latter is faster and more maneuverable.

Indian tank crews will debut during this year’s Army Games riding a T-90S Bhishma, which is an export version of Russia’s T-90 tank.
SR-35 sniper rifle

In another first, four sniper teams from Thailand will take part in the sharpshooters’ contest in Kazakhstan. While most of the participants will be using Russian SVD sniper rifles, the Thais are expected to bring along the US-made SR-25s.

Just like the SVD, the SR-25 utilizes a gas chamber to ensure semiautomatic fire. Fully loaded with 10-cartride magazines, both weapons weigh just over 4.6 kilograms.

In yet another first, Iranian sailors will be taking part in the Games’ Sea Cup tournament on the Caspian Sea, along with their colleagues from Russia, Kazakhstan and Azerbaijan.

The main rule of the game is that none of the participating ships displaces more than 1,000 tons of water or has a crew of more than 60 men.

The 580-ton Hamzeh, armed with a single 20 mm cannon, is the only warship Iran has in the Caspian that meets these requirements.

It was handed over to the navy back in 1965 after spending many years as a royal yacht, and will hardly be able to stand up to Russia’s more advanced missile corvettes.

International Army Games 2017 to Include 7 New Participating Countries
Therefore, Tehran could replace it with Bayandor and Naghdi frigates, which are armed with more powerful 76 mm guns.

The Russian “team” will consist of a pair of 949-ton Grad Sviyash and Uglich small missile corvettes.

Military pilots from Russia and China will be the sole participants of this year’s Aviadarts competition, which will be held on Chinese territory.

While the Russian aircraft slated to take part in this year’s event is known to all, the Chinese lineup remains anyone’s guess with the sole exception of the country’s state-of-the-art Xian H-6K bombers; their participation was announced by Zvezda TV.

The Xian H-6K is the latest version of the classic H-6 bomber, based on the Soviet-era Tu-16. Powered by a pair of Russian-made D-30KP2 jet engines, the nuclear-capable H-6K has a range of more than 3,500 kilometers (over 2,170 miles), which makes it a strategic bomber.

According to Russia's Defense Ministry, the International Army Games 2017 will be held this summer on the territory of Russia, Azerbaijan, Belarus, Kazakhstan and China.

The program of the Games consists of 28 contests, including 5 new ones.

000000
Popular comments
India is not an ally of Russia. Did anyone in Russia notice India's Modi visit to White House lately? And Angola is hardly a worthy ally but rather a liability. Currently, the only reliable ally of Russia is Iran. Russia must get smarter and stop handing out help to lowly back-stabbing governments like India, Egypt, Algeria, etc.
alex_glazunov
2 July 2017, 18:26 GMT1
000000
Newsfeed
0
New firstOld first
loader
LIVE
Заголовок открываемого материала
Access to the chat has been blocked for violating the rules . You will be able to participate again through:∞. If you do not agree with the blocking, please use the feedback form
The discussion is closed. You can participate in the discussion within 24 hours after the publication of the article.
To participate in the discussion
log in or register
loader
Chats
Заголовок открываемого материала
Worldwide
InternationalEnglishEnglishMundoEspañolSpanish
Europe
DeutschlandDeutschGermanFranceFrançaisFrenchΕλλάδαΕλληνικάGreekItaliaItalianoItalianČeská republikaČeštinaCzechPolskaPolskiPolishСрбиjаСрпскиSerbianLatvijaLatviešuLatvianLietuvaLietuviųLithuanianMoldovaMoldoveneascăMoldavianБеларусьБеларускiBelarusian
Transcaucasia
ԱրմենիաՀայերենArmenianАҧсныАҧсышәалаAbkhazХуссар ИрыстонИронауОssetianსაქართველოქართულიGeorgianAzərbaycanАzərbaycancaAzerbaijani
Middle East
Sputnik عربيArabicArabicTürkiyeTürkçeTurkishSputnik ایرانPersianPersianSputnik افغانستانDariDari
Central Asia
ҚазақстанҚазақ тіліKazakhКыргызстанКыргызчаKyrgyzOʻzbekistonЎзбекчаUzbekТоҷикистонТоҷикӣTajik
East & Southeast Asia
Việt NamTiếng ViệtVietnamese日本日本語Japanese中国中文Chinese
South America
BrasilPortuguêsPortuguese
NewsfeedBreaking
14:54 GMTRadical Islamists Across South Asia 'Emboldened' by Taliban Win, Analyst Says on Kashmir Killings
14:53 GMTElon Musk’s Tesla Reiterates Call for India to Lower Import Duties on Electric Vehicles
14:52 GMTWHO to Inspect Sputnik V Vaccine in Russia in Coming Weeks
14:50 GMTClash of the Tech Titans: Twitter CEO Sees Facebook Metaverse as ‘Dystopian Corporate Dictatorship’
14:48 GMTManchester Arena Bomber's Brother 'Laughs In The Face Of Inquiry' After Fleeing To Middle East
14:45 GMTFrench Publishers Reach Deal With Facebook on Neighboring Rights
14:43 GMTUS Distributes 200Mln Vaccines to Over 100 Countries, Most Shots Go to Africa
14:42 GMTMoscow Mayor Sets Non-Working Days From 28 October to 7 November Due to COVID-19
14:36 GMTUnknown Disease Reportedly Kills Over 160 Children in DRC Since August
14:25 GMTLatvia Revokes License of Rebroadcaster of Russia's Channel One
14:24 GMTTurkey Busts Suspected Mossad Ring
14:00 GMTMoscow Calls Statements Made During Pentagon Chief's Visit to Ukraine 'Russophobic'
13:50 GMTCristiano Ronaldo Reclaims Champions League Record from Lionel Messi After Scoring Man Utd Winner
13:47 GMTIndia: Teacher 'Beats Boy to Death' for Not Finishing Homework, Tells Father 'He Is Playing Dead'
13:34 GMTChinese Commerce Ministry Calls for Favorable Conditions to Implement Trade Deal With US
13:33 GMTWhy UK Terrorism Prevention Strategy is in the Spotlight After Sir David Amess Killing
13:31 GMTErdogan Says Turkey Will Recoup $1.4 Bn Paid to US Over Scrapped F-35 Deal 'One Way or Another'
13:29 GMTPyongyang Points to US ‘Double Standards’ in Wake of Sub-launched Ballistic Missile Test
12:59 GMTStraw vs Oil: Scientists Find Unusual Way to Use Husks
12:37 GMTPorn-Addicted Children Allegedly Murder Girl Aged Six in India