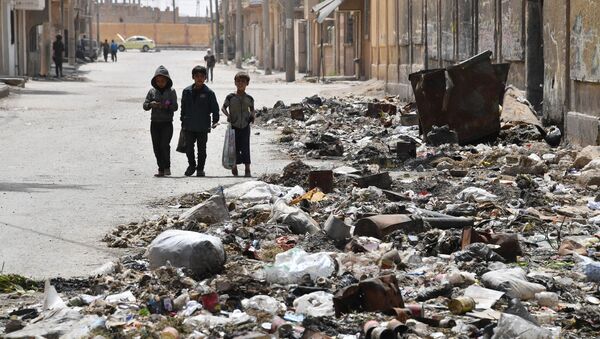 The city of Deir ez-Zor in Syria may face a water shortage due to the Daesh terrorists' plans to build a dam on the Euphrates River.

GENEVA (Sputnik) — The Syrian city of Deir ez-Zor may be left without fresh water over the construction of a dam on the Euphrates River by Daesh terrorist group (IS/ISIS/ISIL) and face a terrible humanitarian catastrophe, a diplomatic source told Sputnik on Saturday.

"The residents of the city, who have already been under the siege of terrorists for a long time, are under a new threat. As soon as terrorists finish the construction of an improvised dam, the town will face a full-scale humanitarian catastrophe. People will be left without water," the source said.

Plane Drops Humanitarian Aid in Deir ez-Zor - Russian Reconciliation Center
The source noted that the United Nations and other humanitarian agencies should pay special attention to the situation in the besieged city.

"Unfortunately, we do not see a relevant reaction from international community and, in particular, from the participants of the Humanitarian Access Task Force [of the International Syria Support Group]. It is necessary to unite not only for accusations of barbaric actions of IS, but also to find a solution to this humanitarian problem," the source concluded.