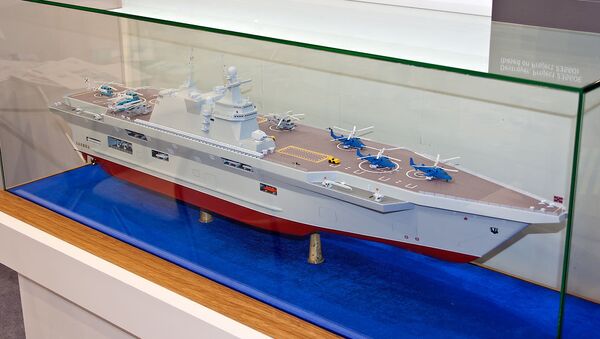 Speaking to reporters on the sidelines of the International Maritime Defense Show 2017 in St. Petersburg this week, Bursuk said that the Navy was looking to take delivery of two new, domestically designed and built helicopter-carrying amphibious assault ships before the middle of the next decade.

Russia's New 90R1 Sub-Killing Rocket Will Challenge NATO's Underwater Supremacy
Commenting on Bursuk's remarks, military observer Alexander Khrolenko wrote that the Russian Navy's need for a new class of large, helicopter-carrying amphibious assault ships was obvious. The intense interest shown to the Krylov State Research Center's Priboy-class* landing ship concept at IMDS 2017 was proof of this, according to the journalist.

The need for the new ship, according to Khrolenko, stems from the Navy's demand for a large vessel which can transport and land troops and heavy equipment on an unprepared shore, carry out amphibious assault operations backed by the ship's air group, and deploy defensive mine and net barriers and sonar buoys for underwater observation in friendly territory. 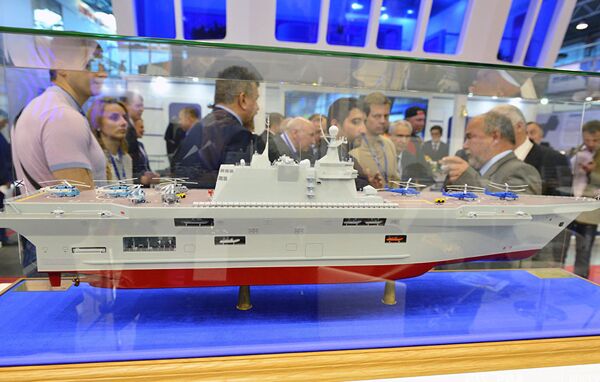 The Priboy's design "is anything but simple," the analyst stressed. "Along with its dozen helicopters, it is designed to carry six assault boats and six landing craft with a capacity of 45 tons apiece. "Its air defenses include four combat modules, including the Pantsir-ME. Artillery is represented with the 76 mm universal naval gun."

Furthermore, the ship will have "an integrated command and control system at the tactical and tactical-operational levels, 3D radar, navigation system, an integrated electronic warfare subsystem and a system to detect underwater diversionary forces and assets." 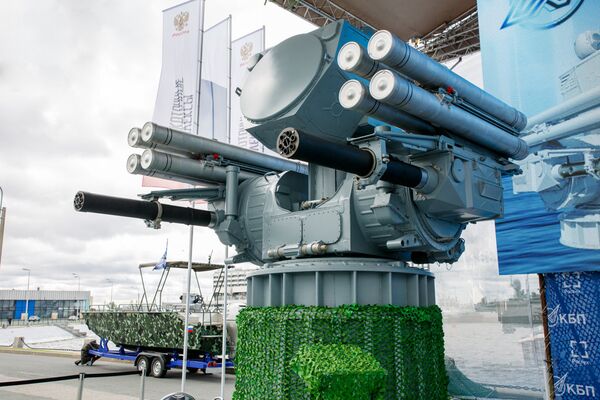 Russia Wins Tender for Ka-52K Helicopter Supplies to Egypt
In Khrolenko's view, the conceptual design of the Priboy project, with its 6,000 mile cruising range, "looks solid and harmonious."

"The story of the project's appearance is also interesting," he noted, "and has less to do with the disruption to the delivery of the French Mistrals than with the scientific and technical foresight of Russian specialists and the self-affirmation of Russian shipbuilding."

Valentin Belonenko, the head of prospective warship designs at the Krylov State Research Center, told RIA Novosti that even after the Defense Ministry made the decision to purchase the French ships, Russian engineers did not give up on the creation of new designs.

"When discussions began on the purchase of Mistrals in 2005, we clarified the purpose of the helicopter-carrying landing ship, analyzed global trends in shipbuilding, and, on our own initiative and using our own resources, began to create our own universal landing ship project. If we compare it to the Mistrals, our effort was from the start meant to create a ship with a larger capacity, a larger air group, and with a strong means of self-defense. We independently worked out several projects, conducted model-based testing, and examined new concepts. In this way, the conceptual design of the Priboy universal amphibious assault ship was born," Belonenko explained.

"Any ship is a compromise between dozens of different parameters," Khrolenko noted. "The Priboy is conceived as transport for about 500 assault troops and equipment, including tanks and infantry fighting vehicles, with the possibility for deboarding [directly onto] the shore. On board, it must have helicopters for combat and landing support. These functions demand an almost aircraft carrier-like deck, and architecture for helicopter hangers of two types" (on the deck itself and in the hull below deck).

Demand for Russian Warships Skyrockets Amid Syria Campaign
"Cranes take landing craft not to a docking chamber, as is customary, but to a dry dock located above the waterline. The lack of docking sections ensures greater safety of operation. In the stern and bow are ramps for the intake of equipment from the shore or the water, as well access points on either side of the ship."

Priboy's self-defense weaponry is minimal, but effective, and includes maritime versions of the Tor and Pantsir systems. The amphibious helicopter carrier is designed for operation in coordination with other ships, and accordingly features advanced radio-electronic and hydroacoustic equipment for monitoring the surrounding air and sea space.

Priboy is expected to have an estimated displacement of 23,000 tons, a 20 m-wide deck, and a 34 m hull width at the waterline. The prospective ship's length is estimated at about 200 meters.

Khrolenko noted that the Navy's bid for a new amphibious assault ship, and the Krylov Design Center's Priboy project could not come at a more optimal time. The Navy's previous generation of landing ships – the Project 1174 Nosorog ('Rhino'), was developed in the 1970s, and has since been retired. 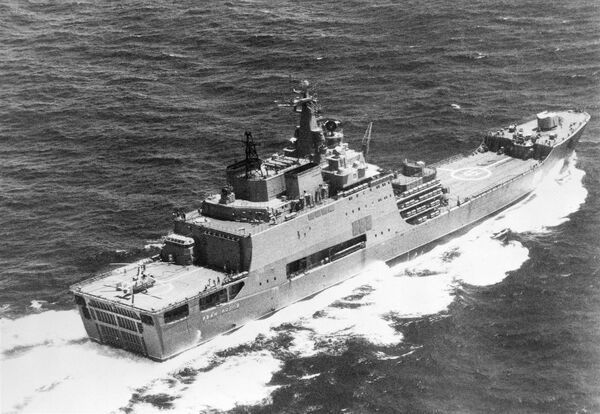 Non-Nuclear Force: Why Russia is Building Lada-Class Subs
Today, the observer stressed, "Russian shipbuilders have the scientific and technical potential, the production base, and the experience to create ships of any complexity.

Valentin Belonenko explained that "after a decision is made at the state level, the ship can be built in five years. The rational organization of the technological process of design and construction will significantly shorten the time necessary to lower the hull into the water. The ship should not be built from individual components, but from assembly units or modules."

Ultimately, Khrolenko emphasized that "today, our shipbuilders and sailors are reluctant to recall the 'French story'. The Mistral is a serious piece of equipment, developed by taking into account the experiences and traditions of [French] shipbuilding. However, the French classify the Mistral as a command ship – that is, simultaneously a transport, command center for heterogeneous forces, and even a hospital. It may be that such a functional load is excessive for one ship, given that it reduces combat survivability. Let the Mistrals serve our Egyptian friends. Meanwhile, Russian shipbuilders are determined to surpass the French project."

000000
Popular comments
Next challenge for Russia is to make ships, that are ALL capable of 55 knots , 70 is BEST. For the LONGEST hauls., Of course, this is MIN, MAX speeds and many ships should go well beyond. Corvettes should reach 140KNOTS. But when possible one day. This new Priboy, should be fast, even longer distance and maybe hybrid , IF it could be done in time. I would start TODAY. Other consideration should be 4 small , VTOL jets. Heard Russia wants them to be dual engine, which may become an engineer nightmare, because of WEIGHT.. But who knows, maybe Russia comes up with something. Lighter engines? Also there should be emergency food meds for a year HIDDEN in the ship./ With today's problems you never know. Opening frontal gates would be a NIGHTMARE to any country . But guess engineers and planners have something good up the sleeves. This should be near ready by 2020. Or well underway. Russia should find a BALANCE to add all equipment all year round of ALL types. Hope they add small CAL machine guns, for pirates that could SNEAK UP. Or near shores.
cast235
1 July 2017, 23:24 GMT1
000000
FORGOT, LASERS and other lights maybe needed in near future, NOT to LAG behind.
cast235
1 July 2017, 23:25 GMT
000000
Newsfeed
0
New firstOld first
loader
LIVE
Заголовок открываемого материала
Access to the chat has been blocked for violating the rules . You will be able to participate again through:∞. If you do not agree with the blocking, please use the feedback form
The discussion is closed. You can participate in the discussion within 24 hours after the publication of the article.
To participate in the discussion
log in or register
loader
Chats
Заголовок открываемого материала
Worldwide
InternationalEnglishEnglishMundoEspañolSpanish
Europe
DeutschlandDeutschGermanFranceFrançaisFrenchΕλλάδαΕλληνικάGreekItaliaItalianoItalianČeská republikaČeštinaCzechPolskaPolskiPolishСрбиjаСрпскиSerbianLatvijaLatviešuLatvianLietuvaLietuviųLithuanianMoldovaMoldoveneascăMoldavianБеларусьБеларускiBelarusian
Transcaucasia
ԱրմենիաՀայերենArmenianАҧсныАҧсышәалаAbkhazХуссар ИрыстонИронауОssetianსაქართველოქართულიGeorgianAzərbaycanАzərbaycancaAzerbaijani
Middle East
Sputnik عربيArabicArabicTürkiyeTürkçeTurkishSputnik ایرانPersianPersianSputnik افغانستانDariDari
Central Asia
ҚазақстанҚазақ тіліKazakhКыргызстанКыргызчаKyrgyzOʻzbekistonЎзбекчаUzbekТоҷикистонТоҷикӣTajik
East & Southeast Asia
Việt NamTiếng ViệtVietnamese日本日本語Japanese中国中文Chinese
South America
BrasilPortuguêsPortuguese
NewsfeedBreaking
15:08 GMT3,000 Security Officers Guard India's Mathura as Hindu Group Threatens to Install Idol in Mosque
14:59 GMTAmid Rumours of US Boycott of Beijing Olympics, How Could the Move Affect the Games?
14:52 GMTUK Policing Minister Not Surprised Over Reports of Drug Use in Parliament Building
14:45 GMTLabour Unions Protest in Brussels Against Low Wages, Expensive Electricity - Photos
14:26 GMTSpanish Court Rules Employee Can be Fired for Job Abandonment During Pandemic - Reports
14:18 GMTAnger and Shock After Intruders Vomit and Urinate at Site of Manchester Arena Bombing Memorial
14:15 GMTUS, UK, Canada Concerned by Tigrayans Arrested Without Charge in Ethiopia
14:07 GMTLionel Messi, Neymar or Himself: Kylian Mbappe Reveals Who's 'Boss' at Paris Saint-Germain
13:58 GMTFormer Indian Shia Leader Embraces Hinduism After 'Death Threats From Muslim Groups'
13:48 GMTMarine Le Pen Accuses EU of 'Playing Role of Firefighter-Pyromaniac' in Ukraine-Russia Tensions
13:47 GMT'Happy a Team Like Barcelona is Interested in Me', Says Salah Amid Liverpool Contract Impasse
13:30 GMTEarth is Getting Its Own Black Box That Will Tell What Caused Humanity's Demise
12:58 GMTChina Says Plots to Thwart Ties With Solomon Islands 'Doomed' as PM Survives No-Confidence Vote
12:53 GMTPutin in Meeting With Modi, Discusses Drug-Trafficking, Terrorism and Situation in Afghanistan
12:46 GMTSri Lanka Demands Compensation From Pakistan Over Brutal Mob Killing of Factory Manager
12:30 GMTPutin and Modi Hold Negotiations at 21st India-Russia Summit
12:27 GMTRDIF: Russia Ready to Provide India With One-Shot Sputnik Vaccine for Adolescents
12:26 GMTKamala Harris' Staffers Reportedly Describe Her as 'Soul-Destroying', 'Bully'
12:26 GMTIndian Music Group T-Series Becomes World's First YouTube Channel to Exceed 200 Million Subscribers
11:56 GMTNagaland Police Accuse Indian Army of Killing Villagers as Death Toll in Firing Incident Rises to 14