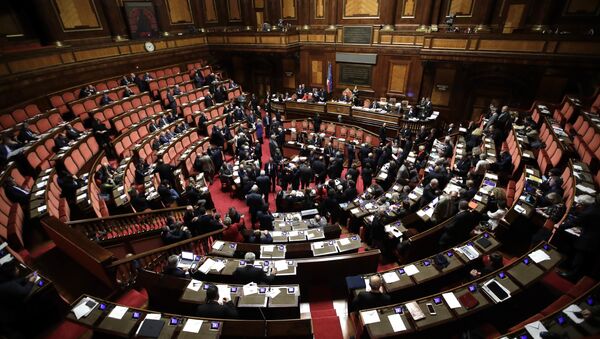 Russia Prolongs Counter-Sanctions After US, EU 'Increase Level of Conflict'
On June 25, voters across Italy went to the polls for the second round of mayoral elections, in which the center-right parties Lega Nord, Fratelli d'Italia and Forza Italia did particularly well.

In Genoa, a former left-wing stronghold for 50 years, a right-wing alliance of Lega Nord and Forza Italia won 55 percent of the vote.

Lega Nord leader Matteo Salvini said the results are encouraging, ahead of national elections in May 2018.

"I can't wait to export the model from these local elections to the national level,' a jubilant Salvini told a press conference.

"If, after decades, they ask us to govern in Genoa, Pistoia or Sesto San Giovanni, it means that we can govern the country too."

Maurizio Gasparri, Vice-President of the Italian Senate, told Sputnik Italia that the victories are a sign that the center-right has a good chance of winning next year's national elections if it can put together a cohesive coalition.

"The center-right did very well in this election because they presented a united front. That's why in many cities there is strong opposition to the ruling left-wing parties. Voters want change they support the opposition. Victory was achieved thanks to strong candidates from the Forza Italia party, which united all the center-right to achieve success," Gasparri explained.

The center-left Democratic Party, which has governed Italy for the past four years, is paying the price for some poor political decisions, he said.

Italy FM's Crimea Statement Shows Poor Knowledge of History - Lawmaker
"I consider the people who have extended anti-Russian sanctions to be idiots. It is pure idiocy, they are acting against their own interests. (Prime Minister, Paolo) Gentiloni is behaving irresponsibly: first he says that sanctions will be abolished, and then he supports their extension. Gentiloni is acting against the interests of Italy and Italian producers. Italy's relations with other countries are deteriorating under his leadership, especially with Russia, which is well known to be making a huge contribution to the fight against Islamic fundamentalism around the world," Gasparri said.

Gasparri said that the policies of Forza Italia leader Silvio Berlusconi, who spent nine years as Italian Prime Minister, are popular with voters.

"Forza Italia leader Silvio Berlusconi recently visited Crimea and met with Putin there. Forza Italia's position on Crimea is the following: a referendum was held in Crimea and the people expressed their decision. Crimea has always been a Russian zone of influence and it didn't become a part of it just recently. Our position on the Crimean issue is reflected by the very fact of Putin and Berlusconi's friendly meeting in Crimea." 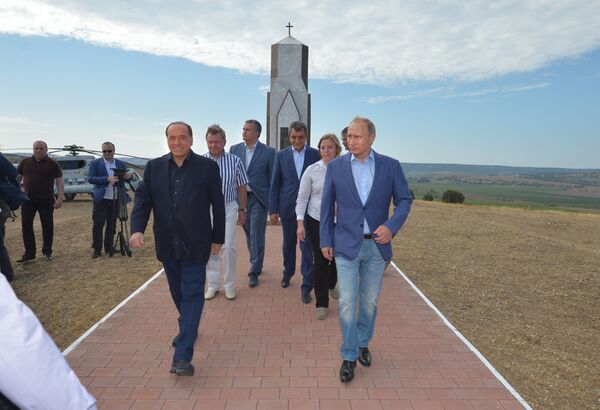 President of Russia Vladimir Putin and ex-prime minister of Italy Silvio Berlusconi September 11. 2015
© Sputnik / Alexey Druzhinin
/
Go to the photo bank
"Our party wants to have friendly relations with Vladimir Putin and Russia, we want to pursue a policy of gratitude for everything that Russia has done to fight terrorism, the operations against the Islamic State (Daesh). Berlusconi has always said that Putin is one of his best friends, they have worked together for a long time and kept in touch when Berlusconi was in power, and since then. Berlusconi is still a popular politician, he talks about what Italy really needs politically and socially," Gasparri said.

"Putin's Russia defends the world against terrorism and Islamic fundamentalism. In my opinion, people who promote anti-Russian sanctions are idiots. The position of the Forza Italia party and Berlusconi is that in foreign policy we should express gratitude to Russia and Putin for his courage and resolute actions. Forza Italia condemns those who interfere in the development of dialogue between Italy and Russia and we do not agree with the sanctions, which are absolutely the wrong decision."

000000
Popular comments
Never believe what the Italian politicians promise before elections, most of the time it's just the opposite of what they do after being elected... :(