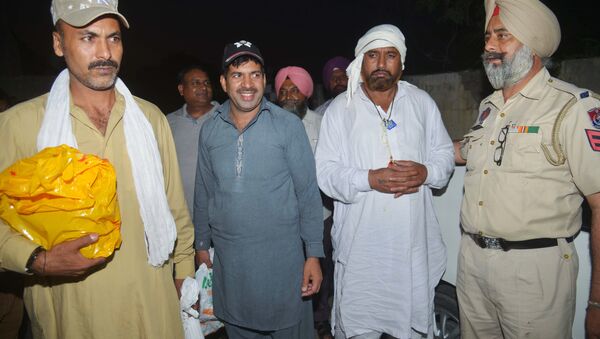 © AFP 2021 / NARINDER NANU
Subscribe
India and Pakistan exchanged through diplomatic channels the lists of nationals of each country, held in the jails of the other country, according to the statement of the Indian Foreign Ministry.

"India and Pakistan today exchanged, through diplomatic channels simultaneously at New Delhi and Islamabad, the lists of nationals (including civil prisoners and fishermen) of each country, held in the jails of the other country, consistent with the provisions of the Agreement on Consular Access between India and Pakistan," the statement said.

New Delhi requested Islamabad to grant full consular access to Indian nationals, held in custody of Pakistan, including to Kulbhushan Jadav, who was convicted of espionage in Pakistan and sentenced to death in 2016.

"India remains committed to addressing all humanitarian matters with Pakistan, including those pertaining to prisoners and fishermen. In this context, we await from Pakistan confirmation of nationality of those in India’s custody who are otherwise eligible for release and repatriation. India once again requests Pakistan for the early release and repatriation of Indian Prisoners, missing Indian defense personnel and fishermen along with their boats whose nationality has been confirmed by India," the ministry noted in the statement.

India Set To Free Pakistani Prisoners Languishing In Indian Jails
According to the bilateral agreement, both New Delhi and Islamabad have to exchange a list of nationals held in jails twice a year, on January 1 and on July 1.

At least 546 Indian nationals, including 494 fishermen, are currently being held in Pakistani jails, local media reported, citing a list, which Islamabad handed to New Delhi earlier on Saturday.

India’s relations with Pakistan have been tense ever since both countries gained independence from the then-British Empire in 1947, mainly because of the issue of Kashmir, a region that the two countries claim in its entirety and that is currently divided between them. The Indian part of Kashmir suffers from insurgency since the late 1980s. New Delhi claims Pakistan supports the militants, while Islamabad denies the accusations.