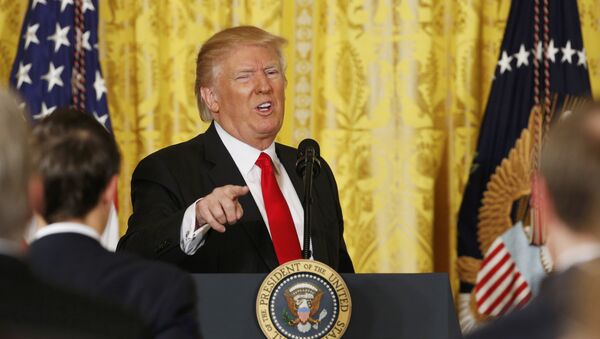 © REUTERS / Kevin Lamarque
Subscribe
International
India
Africa
It appears that US President Donald Trump has recently seized the initiative from his opponents on the both side of the political spectrum and their subservient mainstream media, RIA Novosti contributor Igor Gashkov writes, adding that American voters have become fed-up with MSM "Trump-Russia" story.

CNN Producer 'Fesses Up: Russia Narrative 'Bullsh*t,' 'We Do It for the Ratings'
US President Donald Trump has gone on the offensive, RIA Novosti contributor Igor Gashkov writes, shedding light on the protracted war between the American leader and the US left-leaning MSM.

On Thursday, Deputy White House press secretary Sarah Huckabee Sanders drew attention to the recent Media Research Center study which indicated that the US mainstream media is literally obsessed with the Trump-Russia investigation.

Indeed, as the study showed, since May 17 almost 353 minutes of airtime of the evening newscasts of ABC, CBS, and NBC have been devoted to the Russia investigation. It amounts to 55 percent of all coverage of events concerning the US president.

"You look at the coverage over the last month of the extended period between May and June, all of the major networks, if you look at their coverage and what they're talking about, they spent one minute in the evening newscast talking about tax reform; three minutes on infrastructure; five minutes on the economy and jobs; 17 minutes on healthcare; and 353 minutes — 353 minutes — attacking the president and pushing a false narrative on Russia," Sanders emphasized.

Project Veritas: 'We Want to Shut MSM Down for the Liars They Are'
Sanders is not the only one who believes that the situation has gone beyond the pale.

The latest Harvard-Harris Poll survey showed that 64 percent of American voters believe that the Trump-Russia probes "are hurting the country" while 56 percent of respondents insist it's time for Congress and the media to focus on other issues.

"While the voters have a keen interest in any Russian election interference, they are concerned that the investigations have become a distraction for the president and Congress that is hurting rather than helping the country," Harvard-Harris co-director Mark Penn said as quoted by The Hill.

"Most voters believe that the president's actions don't rise to the level of impeachable offenses, even if some of them were inappropriate," Penn highlighted.

According to Gashkov, the last week of June has proven successful for US President Donald Trump.

"[Trump] managed to enlist the support of the Supreme Court for a temporary ban on migration from six Muslim countries and to align positions with French President Emmanuel Macron," the Russian journalist pointed out.

Trump Urges CNN to Take Down Other 'Fake' Materials After RDIF Article Scandal
The Trump-MSM confrontation has also borne fruit this week.

After CNN was caught disseminating false information regarding the inquiry into Russian Direct Investment Fund (RDIF) CEO Kirill Dmitriev's meeting with Anthony Scaramucci, a member of Trump's transition team, the news channel found itself in the cross hairs of James O'Keefe's Project Veritas.

In footage taken on a hidden camera by a Project Veritas journalist, CNN producer John Bonifield revealed that the whole story about Donald Trump's ties "collusion" with Russia is "mostly bullsh*t."

"It's mostly bullsh*t right now," Bonifield said commenting on CNN's Russia narrative. "Like we don't have any big giant proof."

In a little bit more decent language the stance was echoed by left-leaning CNN political pundit Van Jones who told an undercover PV reporter that "the Russia thing is just a big nothing burger."

However, as Bonifield said, CNN CEO Jeff Zucker had repeatedly urged his employees to return to the Russia story again and again "just because it's ratings."

"A poll conducted by the YouGov research firm in June shows that 70% of Americans believe that the editorial policy of TV channels and newspapers is closely connected with the political preferences of their owners," Gashkov emphasized.

"President Trump spoke about the same thing," the Russian journalist recalled, "[the president was] confident that he was fighting the establishment, including political and media tycoons such as George Soros."

Gashkov called attention to the fact that it was Soros, who predicted in February 2017 the upcoming "collapse" of Donald Trump's presidency.

Thus, it is hardly surprising that the Soros-backed US mainstream media have been obsessed with seeking traces of the nonexistent "collusion" between Trump and Moscow, the Russian journalist remarked.