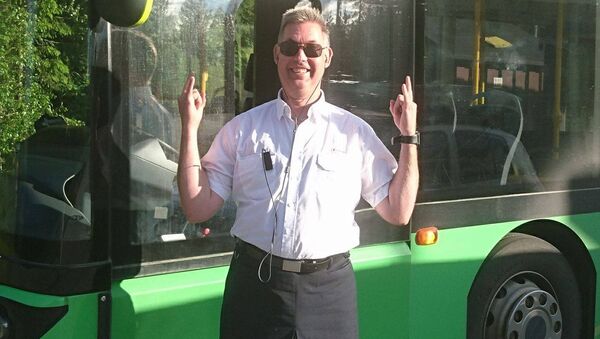 © Photo : Göran Sandberg / facebook
Subscribe
Problem: it's hot outside, and the boss won't allow you to wear shorts. Solution: wear a skirt! However unconventional, for a Swedish driver it worked perfectly well.

Rolling North: Super-Potent Ikea-Labeled Ecstasy Sweeps Europe, Reaches Sweden
Göran Sandberg from the city of Umeå found his own solution to the heat in the driver's seat when he chose to wear a skirt at work, whee he found that shorts were banned by his employers.

Working for the local bus company Transdev, 49-year-old Sandberg found the summer heat unbearable, with the scorching Nordic sun shining through the large glass surfaces and the air conditioning not working as it should when the doors keep opening and closing all the time.

After trying shorts and receiving a reprimand for violating the company's uniform policy, Göran found an unorthodox solution to his problem by borrowing a skirt from a female colleague.

"They allow female employers to wear skirts, and apparently men too, but we have no possibility to order skirts through our webshop, where we order uniforms," Göran Sandberg explained to Swedish national broadcaster SVT.

No Nookie on the Clock: Swedish Lawmakers Say No to Sex Breaks at Work
When Göran donned the skirt, he was contacted by his immediate boss, who offered to order thin suit trousers, which Göran refused. He said that he wanted a functional uniform with handy pockets and explained that he found it discriminatory that only women could wear skirts.

Transdec marketing manager Eva Tiséus said she had not heard of such problems before, stating that the company did not plan to change its uniform policy.

"It is clear that our skirts are intended for women, but if Göran sees it as the solution, he will get his skirt alright. But we turn on the air conditioning so that he does not have to actually wear it," Eva Tiséus said.

For his unconventional approach, Göran has received a lot of support from his colleagues and cheerful smiles from passengers. However, he also admitted to feeling a bit naked at times.

"At the same time, it's quite good, more men should to try it out. It is really a little sad that a man wearing a skirt makes headlines in 2017," Sandberg said.

Sassy Seal Gets Ejected From Swedish Town After Irking Police
Back in 2003, a fellow Swedish bus driver from the same city, Umeå, also tried wearing a skirt amid a heatwave. Mats Lindgren, though, had more luck as he was granted the opportunity to wear shorts in the long run, while also receiving international attention.

Earlier this year, skirts were used as a convenient-yet-unconventional solution to unseasonable heat and regulations in France and the UK.

In France, Göran's bus-driving colleagues started wearing skirts in protest against an allegedly sexist dress code amid a heat have. As was the case in Sweden, the same set of rules that prohibited shorts allowed a breezier option of wearing a skirt.

In Britain, male pupils at the Isca academy in Devon started a bare-legged rebellion against the school's regulations by donning skirts.

Most tweets supporting boys at Devon school wearing skirts to lessons in protest at not being allowed to put on shorts in heatwave. pic.twitter.com/POWm2oTUVj

000000
Popular comments
This dude represents ironically sweden and its citizens regarding the migration crisis..

Jet fuel can't melt steel beams
30 June 2017, 22:51 GMT2
000000
Gaels from Eire through Scotland and on to Normandy and Brittany have been wearing variations on the standard kilt for centuries. I would think the woolen one the driver has on is as hot as trousers if not more so, though. A wearer might prefer to try on cotton twill instead.